When Is Honey Not Honey?

The answer: when the honey contains no pollen. That’s one of the byproducts from collecting the nectar honey is made from. But a recent study shows that the honey in your cupboard is probably not legally honey.

A study by Food Safety News shows that more than 75% of all honey on the market has had the pollen removed. These are mostly the brands you find at the local supermarket. 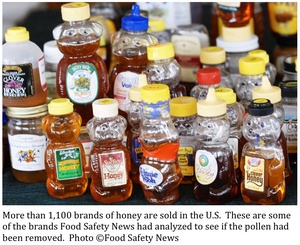 According to the Food and Drug Administration (FDA), honey must contain pollen to be considered legally honey. So what are you buying? Who knows!

Honey has long been considered a better sweetener than cane or beet sugar because it is a natural product not made my humans. And pollen has been considered a healthy additive for the treatment of many diseases, especially allergies. Honey has been found to have antiseptic and antibacterial properties making it appropriate for topical use on wounds.

The FDA has either refused or been unable to crack down on fraud in the honey business, since much of that honey is imported from other countries.

How is the pollen removed? All honey is screened or filtered to remove bits of wax, comb or dead bee parts. But a process called “ultra-filtration” not only removed pollen, but also destroys enzymes and other healthy components. In ultra filtration, the honey is heated, water is added to make it less viscous (thick), then it is pumped under pressure through very fine filters.

Why would you want to remove the pollen? Honey experts and producers agree there is only one reason to remove the pollen through ultra-filtration – to disguise where the honey comes from. And 90% of the time, that means China. That country has been accused of dumping cheap honey on the U. S. market for years. The cheap imports have serious hurt American beekeepers, so a tariff was placed on excess imports of Chinese honey. Those industrious people have been getting around the tariff by shipping the honey to one of several friendly countries where it has been ultra-filtered, repackaged and shipped to the United States. The FDA says if it finds ultra-filtered honey it will not allow it to be imported into the country. However, almost none of the bulk honey imported is checked or tested.

What’s wrong with Chinese honey? It’s usually of very poor quality and often contaminated with antibiotics. During the laundering process, the honey is often watered down or contains high fructose corn syrup.

What can you do to protect yourself? Almost nothing. Without the pollen, it’s impossible to identify where the honey came from. Most honey is blended to create a consistant product as raw honey can vary widely in taste, color and texture depending on where the bees got the nectar. The Food Safety News study found that certified organic honey and those sold directly by small local producers were the most likely to contain pollen.

As usual, it all comes down to money.