In The Bachelor’s Kitchen, we believe the more you understand food, the better you can cook. It’s not just about eating better, it’s also about health. Not only do we bring you information about food, but we keep an eye on food-related news and pass some of that information along to you.

For a long time, this blog and many others have decried the state of food safety in recent years. Profit and corporate food production have often put our lives in danger. And it’s not just us Cassandra’s of the food blogosphere who are paying attention to government attempts to protect us from food industrial safety. 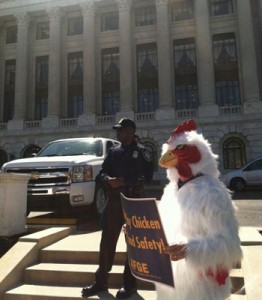 The new rules essentially move the inspectors to further down the production line. Currently, the federal agents inspect the chicken carcasses for any visible defects or problems before they continue down the disassembly line. Under the new rules, the inspectors will leave that task to factory workers and place their examination to just before the birds are cooled before packaging. The inspectors’ biggest concern involves the speed of the production line.

According to Food Safety News:

At the protest rally, inspectors held signs that read: “Chicken Inspection Isn’t a Speed Sport,” “Don’t Play Chicken With Safety” and “Speed Kills.” The number one concern expressed among inspectors was, without question, line speed, and the impact that would have on their ability — or anyone’s ability — to inspect the birds whizzing by.

They say moving their inspection to further in the process and leaving those initial inspections to company workers will allow the processing companies to increase the speed of the line. Already, they say, they have very little time to exam the birds.

The Agriculture Department says this is an attempt to modernize the inspection system and make the best use of taxpayer dollars.

This is a disappointing development. We had hoped the rising instances of food contamination would convince the federal government that we needed more inspections, not fewer.

“Cutting the budget does not justify putting the health and safety of consumers and workers in the balance,” said Wenonah Hauter, executive director of FWW. “USDA inspectors receive extensive training to protect public health in poultry facilities, but there is no similar requirement for company employees to receive training before they assume these inspection responsibilities in the proposed privatized inspection system. This short-sided thinking could actually cost the federal government more to deal with a potential increase in foodborne illnesses caused by unsanitary, defective poultry and meat.”

But this doesn’t mean you should give up eating chicken and other poultry. It means more of the responsibility now rests with us. We have to try to make sure our meat purchases come from a reputable source and that we follow all proper food handling guidelines, including the need to thoroughly cook all meat to an internal temperature of 165°F.

The Metric System Debate: Switch or Why Not?