We were discussing earlier this year the new food trends for 2013. We’ve found some more in which you might be interested. 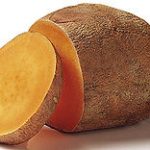 are going to be the new potato on many plates in America this year. The popularity of this tuber has been growing in recent years. Expect to see sweet potatoes used in place of the more well-known white potatoes in more dishes. You might even try to do some interesting things yourself. Sweet potatoes are great baked, swet enough to need little more than a little salt and pepper. But of course, a pat of butter won’t hurt.

In the last year, kale chips have been the in thing. They’re easy to make, quick, and a lot healthier than potato chips. But this year, the kale will be taking a back burner to seaweed chips. We know we’ve been eating more seaweed this year. Sea vegetables are rich in nutrients and just as easy to cook as Kale.

Poor kale is also being challenged from the other end of the produce aisle. Carrots

are becoming trendy, especially the heirloom varieties which come in a wide range of colors.

Craft beers have been very popular in the last few years. While we have no doubt the demand for good beer will always be there, drinkers are going even further retro in selecting alcohol from an earlier era. Hard cider is now the up and coming drink for the hipster set. Once most apples produced in this country were used for alcoholic cider. This is also popular in Europe.

Speaking of bars, the salad bar has been a big selling item in restaurants, cafeterias and grocery stores for several years. During that time, we have seen the selections go way beyond salad to soups, sandwich makings, olives, cheeses and desserts. But in our more health conscious era, we’ll be seeing more juice bars 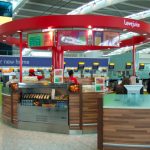 We’ve noted before that diets come and go, which is why we don’t like them. We advocate coming up with an eating plan you can live with for the rest of your life. Not long ago all the talk was of low-carb diets. Then it was gluten-free. This will be the year of the paleo diet. This trend calls for more people going back to hunter-gatherer type eating. This is not a new idea, really. But we’ll be seeing a lot more about this as the months go by.

As always, some trends are good and others, quite thankfully, pass away. But out best advice remains: develop an eating plan you can live with.