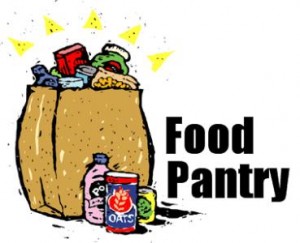 With the bad economy lingering and unemployment benefits running out, more and more people are looking to private assistance programs, like food pantries, for help. These are usually run by non-profit organizations, like churches and community groups.

Many of those receiving the help have said these pantries have made a big difference in the ability to feed their families. But with higher demand, the pantries have been devastated. There was a time not long ago when the pantries could afford to give lots of groceries away to poor people. Now they have to offer them less so they can stretch what they have as far as possible. And where once there were shelves piled high in warehouses, now there are mostly empty shelves. 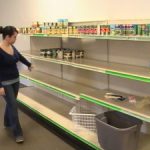 That’s left many food pantries scrambling for more food — food that would otherwise be wasted. Some are trying new technology. Others are trying to make the public and the food industry more aware of the problem.

One example of new technology is a machine used to see if donated cans of food that have been damaged or dented are still good. In the warehouse of the Second Harvest Food Bank of Northeastern Tennessee, there’s a device to check these cans to make sure no bacteria has slipped inside. Cans are placed inside the machine, which then sets up a vacuum around the cans. This machine was used to vacuum-pack foods. But it has been repurposed to checking dented cans. As the vacuum increases, the cans expand slightly. If there was any cracks or gaps, food would be sucked out. If the cans come out dry, they know the food inside is probably still good. 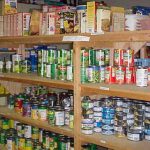 To this one pantry, this could mean tons more food available to feed hungry people. Before, dented and damaged cans usually had to be thrown out because it couldn’t be determined if something had caused the food to spoil.

Other food banks have stepped up their community outreach, working with many companies and organizations to set up canned food drives and donation programs. Others are seeking changes in laws to allow them to take more food from grocery stores and food companies. Some food banks are working on getting more prepared food outlets to donate.

Rhonda Chafin, of Second Harvest, says there’s a lot of food they could be using.

“We still have hospitals, hotels, caterers, restaurants that could give prepared food that has not been utilized, that’s still in the kitchen, that was left over.”

Jonathan Bloom, author of a book called American Wasteland, says Americans squander about 40 percent of the food produced in the U.S. — or 150 billion pounds a year. He says that’s far more than what’s needed to feed the hungry.

“All throughout the food chain, there’s a winnowing process, where anything that doesn’t look quite right or isn’t the right size gets cast aside,” Bloom says. “And this squandering of perfectly edible food is happening from farm to fork. The main culprit here is wanting our food to look perfect.”

He says lots of retailers prefer to throw damaged or bruised food away, rather than donating it, for fear of being sued if something goes wrong — even though there are laws protecting donors against such suits.

Farms are another promising source of more food donations, says Vicki Escarra, president and CEO of Feeding America, a network of 200 food banks.

“We know that today, there is 6 billion pounds of produce that is grown, but never distributed,” she says. Much of it is plowed under when market demand falls short. Now, Feeding America is talking with farm groups about how to get a billion pounds of that food a year to the poor. The good news is it’s healthy food, which clients need. The challenging thing is a billion pounds is a lot of food and it is highly perishable.” 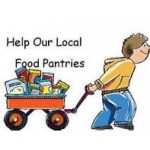 It might be surprising to many Americans how many people in our country are hungry. But the problem is real and it affects children the worst. Give to your local food pantry as often as you can.