We Americans eat more meat than just about any other country in the world. We eat too much meat. A few years ago, chefs, celebrities and foodies began promoting a campaign to reduce meat consumption. They called it Meatless Mondays

But a new study shows the idea might be fizzling out. It depends on who you ask.

The 10-year-old “Meatless Monday” program is organized at the John Hopkins University’s Bloomberg School of Public Health. It’s supporters say the consumption of meat and other animal products has declined significantly. As a result, they say, instances of diseases related to diet also have declined.

But the Animal Agriculture Alliance says the participation in the Meatless Monday program is dwindling. The pro-meat group’s audit says more than 60% of schools who were involved in the program have dropped out or never got started. Same for about 42% of the colleges and universities which signed up. Of the schools that were participating, 57% no longer do. And about 35% of restaurants have dropped out of Meatless Monday menus.

School officials told alliance investigators that there were too many complaints from students and parents. However, they also reported that while they put meat back on Monday menus, they’ve also added a vegetarian option.

Naturally, the pro-meat folks say the 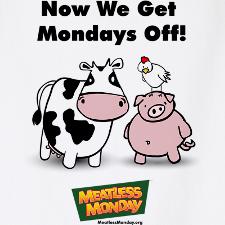 Meatless Monday program is an animal rights conspiracy to outlaw meat. They say the push for the program is using false or outdated information to claim success. But the Humane Society of the United States claims people who eat fewer animal products have better health. Several research studies seem to agree.

The evidence that eating less meat is better for your health, especially if you replace the meat with more vegetables, is pretty irrefutable. That does not mean we should all become vegetarians. The fact is a varied diet is a healthy one.