One of the latest trends in diet advice is to use a larger fork. Why? A study from the University of Utah says people who use a much larger fork actually eat less. 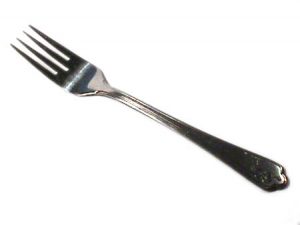 This is similar to a finding some years ago that found people ate less if the plate was smaller. We also know most people don’t really understand what a serving should be on your plate. In this land of abundance, we’ve become accustomed to monster sized portions. Combine that with our training to clean our plates and the desire to get our money’s worth and it isn’t so difficult to see how we Americans have become so fat.

The Bigger Fork Trick. The study was conducted at a popular Italian restaurant in which some patrons were given a larger than normal fork and others were given a smaller than normal fork. It found that people with the larger fork left more food on their plate at the end of the meal than those with the smaller forks. The researchers believe that the larger fork made people believe they were consuming more food per bite and thus were satisfied sooner. They said the smaller fork group felt less satisfied.

The Small Plate Trick. A similar study a few years ago took place at an all-you-can-eat buffet. Some people were given a large plate and others a small one. The study found that those with the smaller plates ate less.

What’s really a portion? Other studies have shown that people don’t really understand how big a normal serving should be. Diet experts say a normal size portion should fit into the palm of your hand. If you use this rule of palm, excuse the pun, you’ll probably eat less.

Do we need all this trickery? Apparently yes. This is a combination of factors which control how much we eat. Everything from time of day to presence of food to where we eat have an effect. This demonstrates that eating and food are about much more than just fueling our bodies. Psychological factors, our upbringing, our emotional state and the availability of food all come into play.

So, I say go ahead and trick yourself. Anything you can do to help you eat better and fight obesity is good, as long as it doesn’t wreck other aspects of your health, like purging yourself after meals. Check with a dietician for strategies you can use to eat less and remain healthy.