Okay, with apologies to John Lennon, I have to say it: Give peas a chance. There, now that’s out of my system, I can go on talking about ways to cook vegetables. We all need to eat more vegetables, less meat, fat, sugar and salt. But many people don’t know how to cook them. Or they just do it the same way all the time. But variety can make these more interesting and something to which you actually look forward. Peas are another common vegetable on the American table. 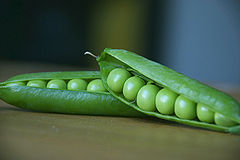 Peas are actually a fruit because they are edible seeds. They are usually grown in cooler climates, planted in the late winter and harvested in early to mid summer. This is another food plant from the Mediterranean. The name pea applies to both the round seeds we usually eat as well as the pod, which is considered a legume, like a bean. They are sometimes dried like beans and used as a soup ingredient, such as split peas. The peas with which we are most familiar are called English or garden peas. There are dozens of varieties. Most mature in about 60 days after planting. They were a staple crop in the Middle East and Southern Europe in the Middle Ages. Immature pea pods are often eaten whole.

Shopping. Look for firm, vibrant green pods without blemishes and with stem ends still attached. This applies to the round English peas and the flat Snow peas. Pea pods deteriorate quickly after picking, so if you’re unsure of the freshness, go for the frozen.

Preparation. Fresh peas should be thoroughly washed. Then remove the hull or pod but grabbing the stem and use it as a tab to pull the pod open. You can also run your thumb along the seam to open it up and remove the peas. Frozen peas or pods should not be thawed before adding to your dish.

Steam. The advantage of this method is it preserves the nutrients and makes them sweeter by breaking down the cell membranes without making them too soggy.

Boiling. This is the most common way of preparing peas. Cooked peas are usually served with butter. But if you want to cut back the fat, use extra virgin olive oil and a sprig of mint.

Microwave. Like most vegetable, peas should be in a microwave safe dish with a couple tablespoons of broth, water or unsweetened apple juice. Cover tightly and heat on high for two minutes.

Sautéing offers a lot of flavor options in addition to salt and pepper. A little butter or oil over medium heat will give you delicious peas in just a few minutes, when they turn bright green. 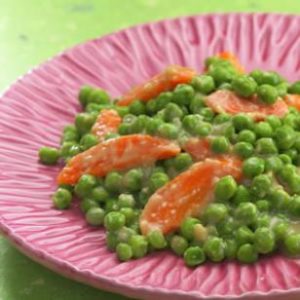 An interesting variation is Miso Glazed Peas and Carrots. Steam 2 cups of thinly sliced carrots in a non-stick skillet. Meanwhile, mix in a small bowl:

Add that mixture with 2 cups frozen peas to the skillet and cook until the sauce thickens slightly.

Miso is a fermented soybean paste usually found in the refrigerated section of the store next to the tofu, usually in the produce aisle. Mirin is a popular Japanese flavoring of sweet rice wine. You’ll probably have to go to an Asian market for that.

Soup. Pea soup is found all over the world. It’s easy and nutritious. It allows you to combine peas with meat, pasta, rice and other vegetables for a complete meal.

Dried peas are not only used to make soup, but in Japan and some other Asian countries, it’s a snack. Perhaps you’ve heard of Wasabi peas, dried peas with a wasabi coating.

Ingredient. Peas are versatile and found as a part of many other dishes in a variety of cuisines. In American Chinese cooking, it’s usually a part of fried rice dishes. You find them in vegetable combinations, pot pies, stews, salads and casseroles.

A note to diabetics: Peas are high in sugar. That glazed peas and carrots dish above has 120 grams of carbohydrates per 1/3 cup serving. That’s a bit high for a side dish. So, use caution and don’t go overboard.