What A Waste of Time, Effort, Money

The Food and Drug Administration has launched a new advertising campaign to encourage consumers to observe food safety handling rules. It includes television spots and print ads in a variety of media. The centerpiece is this image: 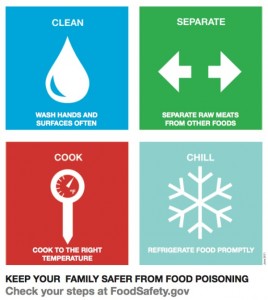 There’s really nothing new here. Anyone who’s worked in food service could recite these rules in their sleep.

But the program misses the real point and the real problem. Most food contamination doesn’t happen in the home. It happens in places where you have no control over handling (restaurants, buffets, etc.) or before you even get your hands on the food (at producer and processing levels). It is there where the government needs to step in and clean up the food supply system. It requires strong regulations and a strong agency to enforce them. As some politicians would say, this campaign is putting lipstick on a pig.

Yet you have to give the FDA points for trying. Without funding or legal authority, the agency can only do so much. And as long as those food companies have a lot of money to throw into candidate campaign funds, only a strong uprising of the public will get Congress and other legislators to do something about the problem.

You Are The Last Line Of Defense