Perhaps you’ve heard this before. If you’re looking for a healthy snack idea, here’s a great one. It takes only a few minutes to make and it never lasts long in our house. 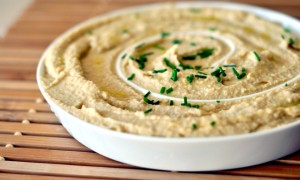 This ancient dish has been around in the Middle East and Southern Asia for centuries. But if you buy one of those expensive tubs of the stuff in the grocery store, you should be forced to run 10 laps around that store. It’s so easy to make, there’s really only one excuse: no food processor or blender.

Without these tools, making hummus is a bit of a chore. And you never get the consistency you want. It can be done, of course. People were doing it without electricity for hundreds of years. But it’s a bit of work.

So, we’re going to assume we’re all in the modern era and have some sort of chopping or blending device around the house. Let’s gather together the ingredients in The Bachelor’s Kitchen.

Hummus is essentially a chickpea dip 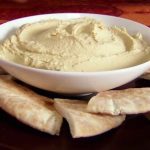 . You can adjust the taste according to what you like: more garlic, less olive oil, whatever. Just load the stuff up in the food processor and let it go until you get the consistency and smoothness you like. And it’s easy to make in large batches for a party.

While you’re at it, you can also make your own pita chips. They’re baked, not fried. That means all of this is a lot healthier for you than almost any other snack you can name, especially the ones you pay all that money for in the supermarket.

It’s best to start on the pita chips first because they take a little longer. Preheat the oven to 350°F and get out a cookie sheet. Get a package of pita bread, or pocket bread it’s sometimes called, and cut the rounds into eight wedges. You can stack them up to do it quicker, just keep it to about 4 or less at a time. Lay the wedges in a single layer on the cookie sheet, keeping just a little space between each one. You’ll have to do it batches, so that’s why we start on this first. Pop the sheet in the oven for 15 to 20 minutes. Test them for crispness. Don’t leave them in too long, they become so hard you can’t bite through them. Take them out just when they start to get stiff. Let them cool and then put them into an airtight container. I like a zipper storage bag.

While those are in the oven, get the hummus ingredients together.

You’ll notice my measurements are not exact. This just isn’t an exact science. This is one of those dishes you just have to taste as you go and adjust accordingly. If you use your taste and your heart as well as your brain, you’ll do just fine.

Wasn’t that easy?  Now your pita chips should be ready. So transfer the hummus to a bowl or plastic container and start dipping. Chickpeas are very healthy. Sure, the pita bread adds a bit of fat and carbohydrate, but you can also use crackers, vegetables or tortilla chips. It’s a good snack.