Hey, every celebrity has put their foot in it at one time or another. Some recover, some don’t. If you have been a long-time reader of this blog, you know we don’t have a very high opinion of the great Paula Deen

. We’ve chastised her for her endorsement of Smithfield, one of the cruelest meat producers in America. And while many of her recipes and dishes are sure to appeal, most are also sure to give folks like us a shortened life span.

We have always admired Deen for her long struggle to raise her family and run a business by herself. From very humble origins, with hard work and a good sense of what food comforted people, she created a mini-empire in Savannah, Georgia. That’s the American dream and she deserves to reap the rewards of all that hard work. 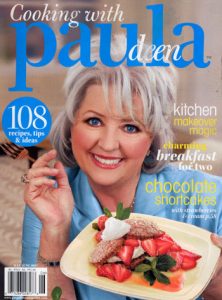 It was her bubbly personality and infectious laugh that helped make the Food Network such a big success. Her openness made millions of viewers watch her programs, seek out her restaurant, buy her cookbooks and merchandise. Her openness also got her into trouble.

Like many celebrities, especially TV celebrities, she accepted a job promoting products. Smithfield pork products. Even after she was shown evidence of the cruel treatment and multiple work violations at this company’s plants, she continued to represent it. She claimed that all that had nothing to do with her.

Many people were disappointed at Deen’s response. Here in The Bachelor’s Kitchen, we felt she of all the people who interact with the company had the clout to at least get the Smithfield management to listen. Failing that, we are sure the state legislatures, now anxious to pass so-called Ag Gag laws, would love to hear from her making a plea for better treatment of animals and workers.

This time, she’s really stepped in it. Under oath in open court of law, she testified she had used the big “N” word referring to people of African decent. She tried to excuse it by saying she grew up in a different time in the South and such language was common then. While that’s true, she didn’t step up to defend herself very well. In fact, she kept her silence until she released not one but two video taped responses. She apologized and asked for forgiveness. But her big sponsor, Food Network, wasn’t having any of it. We imagine the management of the highly successful cable channel has warned her before about offending members of their audience. They announced almost immediately after her videos that they were not renewing her contract which runs out in a few days.

Deen is clearly a good cook and a successful businesswoman. But her apology video rings of being too little, too late. But it’s not like the poor lady will be put out into the streets of Savannah anytime soon. Her restaurant routinely turns people away because they just can’t handle all of them. Her cookbooks and other merchandise will continue to sell well for a while. And we know she will probably pop up somewhere else with her Southern charm and that infectious laugh.

We suppose no one ever explained to her that she’s more than just a good cook. She should know that whether she likes it or not, a TV personality like her is a role model. And role models just can’t get away with the stupid stuff the rest of us do. If you don’t want EVERYTHING celebrity brings, then keep that kitchen door closed. She stepped out into the spotlight. She’s finding out just how harsh that light can be.

While we are not a fan of Ms. Deen, we do feel sorry for the loss of such a powerful icon of the food world.