are not Chinese. They were invented, most believe, in San Francisco. And they did not become popular until after World War Two.

That doesn’t mean there are not similar foods from Asia that we might say are inspirations to Chinese American dishes. The humble fortune cookie may have been inspired by a Japanese cookie created in the 1800’s. This kind of cookie is called tsujiura senbei (辻占煎餅?) and is still sold in some regions of Japan, especially in Kanazawa, Ishikawa.[2] It is also sold in the neighborhood of Fushimi Inari-taisha shrine in Kyoto.

But real Chinese desserts are available, and they usually are very close to what one would find in China. It’s almond cookies. 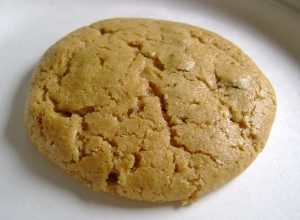 While the origins of this treat made from ground almonds, it seems likely that the Chinese got the idea for these cookies from the English. That’s because they are mostly found in Canton, Hong Kong and Macau, all areas once dominated by the British.

But that is just our guess. Almond cookies are found in various forms around the world. They are usually shortbread cookies either contain almonds or decorated with the shelled nuts.