On the News Page today, we have a health update on the relationship between what we eat and our health.

Healthy people who tended to eat a lot of preserved meats like bacon, sausage, hot dogs and cold cuts were much more likely than those who rarely touch the stuff to go on to develop heart disease or Type 2 diabetes.

That’s from NPR’s Deborah Franklin in her report on a new study from researcher at Harvard University. The study shows that unprocessed red meat, like steak or pork chops, did not have as bad an effect as products like bacon and sausage. 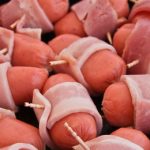 Now I’m not against the eating of meat. But I think I’ll think twice about picking up that package of bacon next time. And I know bacon makes almost anything taste better. Sometimes we just have to weigh the cost against the benefits. Seems like the scale is leaning more toward cost on this one. Check out our News Page for this and other food news every day.