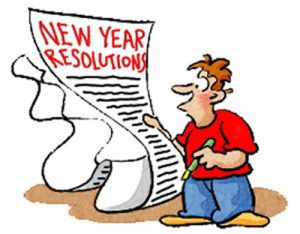 What about making food resolutions, not to eat less, but to eat more. Wouldn’t that be easier to keep? 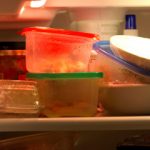 how about resolving to throw out fewer leftovers? Americans throw out an astonishing amount of food, most of it perfectly good to eat. There are people who don’t like leftovers. But those people are just lazy and lack imagination. If you keep the elements of your meal separate, you can do new combinations and cooking methods to produce totally new dishes.

Is there something you’ve always wanted to cook? Why not go through some of those cookbooks on your shelf and find a handful that you would really like to try. Then mark your calendar for a day you are going to give it a try. Why not? You might have to try a new technique or work with ingredients you’ve never seen before. Who knows what great discoveries you could make about your taste, your food world and your own talents?

How about resolving to cook safer? 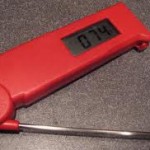 We’re not talking about grab bars on your oven. We’re talking about food safety. Unfortunately, the way food is produced in this country leads to high instances of contamination by nasty things like salmonella and e. coli. But you can have a safer kitchen easily with just one purchase: a food thermometer. Whether you get a digital instant read model or a cheap stick version, it really could save your life. Just because the food looks done doesn’t mean it is.

Is there a food you really enjoy? Something you would order if it was your last meal? Then resolve to make it more often. Life is short and we don’t know what comes next, so enjoy the things you like more often than maybe you have. Is it fattening or unhealthy? Find a way to make a better, healthier version. Then enjoy.

The amount of different foods available in the world is more than astounding. Right in your own grocery store probably are hundreds of items you’ve never eaten. Resolving to eat something new every week shouldn’t be too hard to keep. 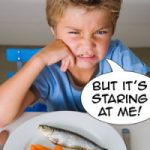 Start at one end of the store and work your way around. In produce, there probably are some fruits that you’ve wondered, “What does that taste like?” We are fascinated by things like starfruit that we’ve never tasted. Then move on to bakery and try a type of bread you have never eaten. At the deli counter there are probably all sorts of things that are new to you. There you might even get to taste something without buying a lot of it. And there is cheese. There are hundreds of varieties of cheese in all price ranges. Probably, there is a cheese counter near or in the Deli area. You could do a new one every week and barely put a dent in what’s available.

In a similar way, spices have always been a valuable trade between cultures all over the world. They still are. Go beyond the spices in the grocery store and explore the world at your local spice shop.

Curry, turmeric, lemongrass, peppercorns, cardamom, nutmeg, all can bring the flavors of new cultures right into your kitchen.

Life is not getting easier. We seem to get busier all the time. The slow-cooker has regained some of its popularity in recent years because it can cook dinner while you are at work. People are discovering you can cook a lot more than just soup, chili or pot roast in the slow cooker. You can make breakfasts, desserts and vegetables. So, resolve to learn to learn to use your slow cooker more. In fact, you can apply that to any cooking method you don’t use often. 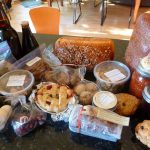 We have discovered that making your own barbecue sauce, pasta sauce and granola gives us a better product specifically designed around my tastes and dietary requirements. We control the amount of sugar, salt and fat. This year, we want to learn to make our own pasta. I we can do it, so can you.

Going out with your friends is expensive. Why not bring your friends to you? Host a dinner party! If you like to cook, there’s no better way to show off your knowledge and skills. It doesn’t have to be big or fancy. Just have a few friends come over and give them some great food. You might surprise yourself at how much fun it can be.

With these sorts of resolutions, you might succeed in keeping them. Certainly, you would have a better year.