Eating has become complicated in our modern life. But it doesn’t have to be.

Amen to that, sister. That’s from Christina Pirello, 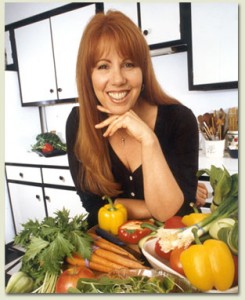 an advocate of eating better with natural and whole foods. She’s saying what we’ve been saying for some time, as readers of The Bachelor’s Kitchen know.

In Change Your Life, Cook Dinner! Pirello dissects the conflicting information about what we eat.

It’s as though we don’t even see food as food anymore, just the sum of its nutritional parts. We have lost touch with our intuition and fallen victim to the science of nutrition. And as soon as we lost touch with our gut instinct, we became the perfect victims for the sharks who swim just under the water…marketers. They pounced on our confusion and through the smoke and mirrors of dazzling packaging, checkmarks, seals of approval and health claims have slowly and consistently robbed us of our health. And it seems to me, made us stupid in the process. It’s as though we don’t think for ourselves anymore — about anything.

Even those of use with pretty good nutritional knowledge find ourselves confused. If we’re supposed to eat a low fat diet, what about good fats? Can artificial sweeteners be worse than sugar? Why is there so much emphasis on carbohydrates in the government’s recommendations? Why so many questions.

Food is simple. Nature is simple. It’s easy to be healthy and vital. But we have to understand a few things first. There are a couple of facts about the effects of food on health that are not in dispute by any expert I have heard.

For example, we all know that our diets are killing us. But rather than change our food supply, everyone’s talking about some sort of cure, a magic bullet that will fix the problem, a single culprit to eliminate.

And we know that people who eat a more traditional diet for their culture or region don’t suffer from the same diseases, such as obesity and diabetes.

This tells us something very important. There is no one diet that serves all of humanity well. As humans, we can adapt to a wide variety of diets and foods — except, it seems, to the modern Western diet so commonly eaten today.