Rice is one of the best staple foods we can eat. It is easy to digest, easy to cook, and gentle on your body’s systems. Compared to most other grains, it is the least allergenic. Rice is consumed all around the world and has been for thousands of years.

Many cooks find rice hard to cook. We in The Bachelor’s Kitchen eat a lot of rice and have tried many methods to cook it. Most of these cooking tips apply to white rice because long-grain white rice is what most of us will encounter in our stores, pantries and kitchens. This variety stores for a long time and is good to have around the house.

Cooking rice is simple. But we must admit it may take a little practice to get it just right. That’s because different stoves and cooking methods can vary widely. You can avoid a lot of the hassle by purchasing a rice cooker. 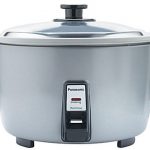 These are widely available and inexpensive. They come in a variety of sizes and styles, but all operate in the same way. If you eat a lot of rice, no matter what kind of rice, this is a good investment.

But for thousands of years, people have cooked rice over a fire or stove and have had a lot of success. There’s a series of steps to follow.

Make rice a regular part of your meals. It’s good for you and inexpensive.