As we continue our series on cooking vegetables, we come to one of my favorites: leeks. Leeks are relatives of onion and garlic, but they have a more subtle flavor. 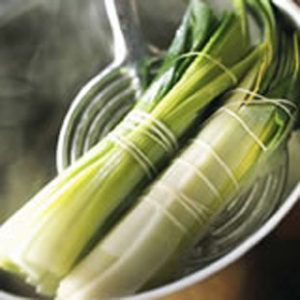 Leeks look a bit like a scallion (green onion) on steroids. Long green leaves extend from a bulb with roots. Instead of being tubular, like scallions, they are flat. Cutting into the bulb, you notice that it’s made up of layers like the onion, but more like tree rings than the globe-like shape of onions.

Like its relatives, onions and garlic, leeks are not often served on their own. But if you try them that way, I think you’ll be surprised at their delicate flavor.

Leeks are the national symbol of Wales because a legend says welsh warriors wore leeks tied to their heads to identify themselves from their Saxon enemies. It says the first battle between them occurred in a leek field.

Shopping. Look for long stalks ranging from light green near the bulb to dark green at the top. Stalks should be sturdy and not dried out or bruised. At the other end, roots should still be attached to the bottom of the bulb. When weighing, remember that much of the green stalks will be removed and used only for stock.

Cleaning and Preparation. Cleaning is one of the most important steps in cooking leeks. That’s because the layers of the bulb and leaves make a good hiding place for dirt. Not cleaning leeks thoroughly will result in gritty food from the sand that hides deep in the plant. Trim off the roots, being careful to keep enough of the base to hold the leek together.  Remove the ends of the stalks that you’re not going to use and rinse the remainder of the leek. The next step depends on the type of cooking or dish you’re making.

In a sauté or some soup recipes, cut the leek into 1/4-inch thick medallions and place into a large bowl of water. Work the medallion around and separate into thin rings. The leek parts should rise to the top of the water while the dirt settles to the bottom. Gently remove the clean leeks and drain on paper towels.

For all other methods, cut the trimmed leeks in half lengthwise and submerge in water. Thumb the layers open without pulling them apart, allowing the grit and dirt to fall out of the leek into bottom of the water bowl or sink.

You can also slice into the leek from the top almost to the bottom, creating quarters that can now be opened up and thoroughly cleaned.

Braising. Take the half leeks and put into a sauté pan with some olive oil to braise. Add in a cup of chicken broth and some peppercorns and rosemary. Simmer covered for about 10 to 12 minutes. Cooled braised leeks make a great addition to a salad with a bit of vinaigrette.

For roasting, coat the leeks with oil and layout flat on a baking sheet and bake in a 500º oven 10 to 15 minutes or until golden brown. Stir at least once about halfway through cooking.

Grill the half leeks over medium heat in much the same way you would ears of corn. Turn them occasionally. This takes about eight minutes to get nicely browned.

Sauté. Add the medallion pieces in a hot, pan with hot olive oil. Stir and cook until softened, about five minutes.

Leeks are usually in season in the fall, although there are some varieties that grow all year around. I most often find myself using them in soups, like Cock-A-Leekie, a delicious soup of chicken thighs or other chicken pieces without bones, leeks, barley or potatoes, herbs, celery and chicken broth or stock. Keep an eye out for these super onions with a surprisingly light flavor.