If there’s one dish that you find all over the world, it’s dumplings. They’re found in so many cuisines, often with widely different fillings and styles.

I don’t have a lot of experience with making dumplings, although I love them. They’ve always seemed a lot of work. But let’s look at some different kinds of dumplings from around the world and how to make them. Maybe that will inspire both you and me to make some dumplings soon.

Dumplings are cooked balls of dough. They can be in a freeform spoon shape, rolled or flattened. They are made from flour, potatoes, bread or matzo. They are fried, steamed, boiled, baked or simmered. They can be sweet or savory. They can be filled with meats, cheeses, vegetables, fruit, soup or nothing at all. In short, these are very versatile, which may be why they are found in so many different cuisines.

Drop Dumplings. When I was growing up, dumplings meant those balls of dough cooked in the broth in a pot of 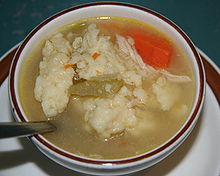 Chicken and Dumplings. Drop dumplings get their name from the way the dough is formed and entered into the cooking liquid. These are a variation on Savoury dumplings found in Britain and Ireland.  In the American version, a slightly sticky dough is made from flour, milk, salt and baking powder. Once the cooking liquid is boiling, or simmering, a spoonful of dough is nudged off the spoon and into the hot liquid. These dumplings turn out soft and succulent on the outside, doughy and chewy on the inside.

Rolled Dumplings. I always thought of these as Grandma dumplings. They are particularly popular in German and Polish cooking. In these, a standard dough is made and rolled out like a pie crust or pasta, but not as thin. As with the drop dumplings, they are plunged into hot broth and cooked, like pasta, until they are puffed up and floating.

Ravioli. Believe it or not, ravioli are actually dumplings. Pasta dough and dumpling dough are very similar. Homemade ravioli are very popular in upscale restaurants. They often contain a wide range of fillings beyond the usual cheese or meat. Pumpkin makes a good vegetable filler, but anything that can be ground into fine paste can be used.

They can be square, round or any other shape you like, as long as the top and bottom pieces of dough can be well sealed.

When making ravioli, as it is with other filled dumplings, try to get as much air as possible out of it before you seal it. Sealing can be done in several ways. In most Asian dumplings, plain water is used to glue the dumpling together. Some recipes call for an egg wash. And others use crimping, where you pinch the two sides together. Fingers will work in many cases. In others, use a fork to push the two edges together.

Gnocchi is another type of Italian dumpling. Gnocchi literally means lump, which is a good description of this unfilled dumpling. It’s usually made out of egg, potatoes and flour but can also contain ricotta cheese and spinach. Usually, they are boiled in water, but can be cooked in broth. They are usually served with butter or cheese, sometimes with a pasta sauce.

Palt is another kind of potato dumpling found in Swedish cooking. A similar type is found in Norway and other Scandinavian countries. Almost all of these are made with potatoes and flour then boiled. Some are filled, some not.

Pierogi is just one type of dumpling found through central and eastern Europe. It is probably the best known in the U.S., thanks to Polish immigrants. Pierogi are just like ravioli and are often served with sour cream. The most common versions are savory containing a mixture of mashed potatoes and cheese.

Spatzle. This German dumpling is made from flour and potatoes. It is boiled in water. A sweet version uses the same dough wrapped around plums or apricots which is then boiled.

Kreplach. This Jewish dumpling is usually filled with meat or mushrooms and then cooked and served in a soup.

Empanadas are found throughout Latin America in a wide range of variations depending on the country of origin. Most often, we see these as fried turnovers, often filled with the same ingredients as a sandwich. 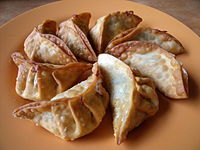 Pot stickers. This is a version of Chinese dumpling, usually filled with finely chopped meat or seafood and vegetables, especially Chinese cabbage.  They are usually served with a dipping sauce made from soy sauce, vinegar and chili paste or chili oil. The name comes from how they are cooked. The dumplings are first boiled or steamed in a shallow pan and then fried when the water evaporates This browns the dumplings on one side. They sort of stick to the bottom of the pot, thus called pot stickers.

Wontons are similar, although the dough is usually rolled out a little thinner. The wrapper is then filled with a ground meat paste and cooked in soup.

Gyoza. These Japanese dumplings are made with eggs and rice or wheat flour. They are filled with a wide range of meats, like octopus, pork or fish, and vegetables such as ginger, onions or cabbage. They are served with dashi, tea or a soy dipping sauce. 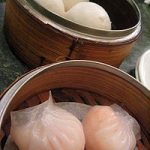 Dim Sum. These are not really dumplings, but can include them. Dim Sum refers to steamed dishes served in small servings, like the Spanish tapas. But dumplings are almost always included. It should be served with tea, as this dish was developed in tea houses in rural areas and along the Silk Road.

For dessert, a popular sweet dumpling found around the U.S. is the baked, fruit-filled dumpling. Similar to a turnover, it is filled with cut fruit or a pie filling. They are baked in a sweet sauce. Apple Dumplings are probably the best known version of this.

Frozen dumplings are available in most major supermarkets and can be quite good. Just make a nice dipping sauce to go with them. A post on dipping sauces will come next.

Dumplings are often associated with fond memories of childhood. They are comfort food. They don’t have to be fattening. Do you have a favorite type of dumplings? How about a fond dumpling memory? Please share them with the rest of us in The Bachelor’s Kitchen. Use the comments link just beneath this post, or use the Contact Us page.