What is the responsible eater supposed to do? First we are told to eat more fish and seafood for better health. Then we are told that if we do the oceans will soon be empty. So which is it?

In reality, there remains a lot of fish in the sea. The problem is that many of our favorite species are being fished into extinction. Add mega-trawler fishing techniques and it is easy to see how many fish are no longer showing up on our dinner plates. Add to that the fact that mercury contamination and other pollutants are ruining many of the most popular fish stocks. It is enough to make a fish lover cry.

But, if you are willing to look at some ugly fish, you might discover a whole ocean of possibilities, most of them very sustainable.

So, why don’t we? According to chef Rick Moonen, we have a fear of fish. We often say we do not know how to cook it. We are afraid of overcooking it. We have bad experiences with smelly fish with lots of dangerous bones.

We often rely on familiar fish that are more forgiving when we cook them. Salmon and cod

are the two favorites in America, because up until a few decades ago they were very plentiful. Salmon is an oily fish that can stand a little overcooking without drying out or turning into fish leather. Mild, flaky cod is easy to cook and was once so abundant you could just stick a net in the sea and wait for it to fill up with cod fish.

But Atlantic Cod and Salmon are all but gone, except in fish farms. The farms can be polluting and the fish are fed an unnatural diet that affects the taste compared to wild Pacific varieties.

So what can you eat? Some varieties of fish are hard to find in the stores because they lack demand. Others are popular in Asia and Europe, but not in North America. If you have the chance, try some of these lesser-known fish.

is a great alternative to cod. In England, home of fish and chips, the spiny dogfish is another cod alternative that’s being used throughout Europe. But don’t look for dogfish at your seafood counter yet. Nearly all of the U.S. catch goes overseas. 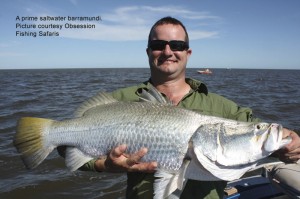 is another great choice, one that can be farmed easily. This South Pacific fish, well known in Australia, can be raised in indoor tanks and fed a vegetarian diet which prevents the “swampy” taste many people have expressed about the wild caught fish.

Let’s explore the world of fish over the next few days so you can explore healthy and sustainable options at the seafood counter.