Some time ago, I talked about getting all your ingredients together when you start to cook.  This is called mise en place, “things in place.” This is important because sometimes the cooking can go fast and furious. You may not have time to prepare the next set of ingredients. Then you end up with burned or overcooked food and that’s not good for anyone.

Many people, especially if they are new to cooking or don’t do it that often, think that for the protection of your health and tummy, cold ingredients should remain cold until the last possible moment. We have visions of potato salad in the sun sending dozens of family members to the emergency room.

But the fact is, for the most part, your worries are unfounded. Remember, people have been cooking for tens of thousands of years, nearly all of that without refrigeration. You should have plenty of leeway leaving your prepared ingredients on the counter while you cook. 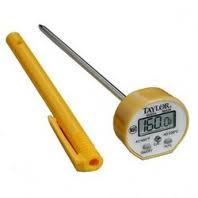 Temperature. When you buy frozen or refrigerated food at the grocery store, unless it’s very hot outside, food won’t get too warm on the way home. Yes, sometimes something soft like ice cream can start to run a little. But most of the time, things are so thoroughly frozen or cold they lose very little of that during the time between the store and the home kitchen.

The same is true at home. Usually, food that’s been kept for more than a few hours in your fridge or freezer are not going to warm up that fast, even in a warm kitchen. In general, you should have at least an hour before your food begins to reach the danger zone where bacteria can begin to grow in and on that food.

Bacteria grow at a temperature between 40º and 140ºF. That’s why cooks are told to get food above 145º for several minutes to ensure all dangerous germs are killed. That’s also why your home refrigerator should be below 40º. There are a few strange bacteria that can thrive outside that range, but they don’t live in our environment. Those live in the Arctic or outside volcanic vents deep in the ocean.

What about other micro-organisms? Good question. There are viruses and other little creatures that could live on your food that you can’t see. Viruses usually get on and in food because of improper handling, not exposure to open air. Molds and yeasts are always in the air and will set up shop in food if given the chance, but they are usually noticeable by sight and smell. Also, these non-bacterial life forms usually don’t make you sick. However, they live in similar conditions and so might indicate the presence of bacteria.

How much time is safe? The truth is that it varies according to the type of food and the conditions around it and how well it has been stored. As a general rule of thumb, food should never be left out, whether from the refrigerator or the oven, for more than four hours. Personally, I believe that one hour is the maximum I’m comfortable with.

When I’m cooking, I spend a few minutes looking over my recipes and planned menu and make mental notes about what needs to be done when and in what order. Sometimes there will be a few moments to get the next batch of ingredients ready. And sometimes the recipe is so simple that I don’t bother laying everything out as I will have time as I go to add the ingredients directly. But most of the time, it’s worth the effort to get everything ready, ingredients and equipment both.

Factors to consider. While it seems like bacteria can live in a very wide variety of environments, the fact is that they are like all living things. There are foods and conditions they like better than others. Bacteria feed on protein and carbohydrates. They like water and warmth. That means they are likely to thrive in some foods while leaving others completely safe. Dried meats and bread, for example, can be safe at room temperatures because they don’t have water in them. Fresh meat, seafood and opened fruits,vegetables and eggs have lots of water and are favorite places for bacteria to grow. The outer casing on eggs and fruit make a big difference. Unless there are cracks, gouges or holes, bacteria can’t get inside and have very few places to get a hold. So, unopened fruit can stay safely on the counter for days.

Acidity. Bacteria don’t like environments with pH levels below 4.6. That’s why acid is often used as a preservative. Vinegar and lemon juice raise the acidity of foods, making them unattractive to bacteria. Salt will also alter the acidity level, which is why it has been so valuable through history.

In addition to those factors, most bacteria also need to breathe. Foods sealed in vacuum packs, submerged in oil or inside a properly prepared can or jar are usually safe from all but one form of dangerous illness. Botulism only grows in an oxygen-free environment and is deadly. However, it is rare.

While you might find all this frightening, the fact is that food-borne illness usually can be avoided with just a little awareness and properly handling.