Can food go out of fashion? Of course! And just as we see the best and worst lists at the end of every year, critics begin predicting what foods will be hot this year.

Any guesses? Please let us know what you think by clicking on the comment link below.

Let’s start at the end of the meal with dessert. Cupcakes have reigned as the big dissert item for a couple years now. Predictors last year saw the rise of pies as the new hit sweet at meals’ end. But that never seemed to materialize as far as I could tell. 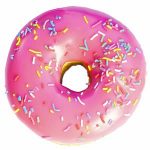 Yes, fried sweet dough topped with sugary glaze or icing. Now, this is a trend I think we’ll actually see. Already I’ve read a couple of stories about trendy doughnut shops in New York. If people are willing to wait in line for doughnuts, we know this humble confection is going to be a hit.

In the ethnic food category, some culinary prognosticators say Peruvian cuisine will be all the rage this year. But some chefs say that’s ridiculous, since the food is nothing special except for ceviche, a dish of raw seafood in a spicy acid sauce.

Other food experts predict a revival of Thai 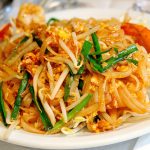 cuisine will emerge during 2012. Some say Moroccan and Jewish foods will be back in fashion.

Happily, one trend seems likely: more eating at home. Even if and when the economy improves, more people are seeing the benefit of cooking their own meals instead of going out. Along with that, we will also see more people raising their own food and sharing it with family and friends. Backyard chicken coops

and vegetable gardens are popping up everywhere. Small co-ops are being formed to spread the bounty among other super-small growers.

The trend of shopping at farmers markets has already seen phenomenal growth in the last year and that’s likely to continue. The idea of eating food that’s grown in the area and is in season is catching on with more home cooks as well as chefs. 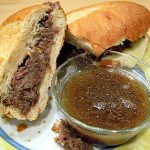 sandwiches will be a big treat during this year. Not only will we see this old standby showing up in more home kitchens and restaurant menus, but we’re expecting to see chefs deconstruct, rebuild, upgrade and reconceptualize this roast beef au jus entrée.

Kids menus are out, and we couldn’t be happier. With more parents concerned about kids’ health and childhood obesity, fun shaped processed chicken bites are disappearing and being replaced with tasty adult-type food with healthier options.

And when you do go out to eat, expect to see more communal dining spaces 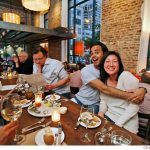 with more home-type cooking on the menu. More restaurants are doing away with the two and four person tables and moving to European family style eating with long wall-to-wall tables where you eat with strangers, but make new friends fast. You might even be sharing a heaping plate of homestyle fried chicken or humble meatloaf along with a big bowl of mashed potatoes or other homey dishes with eating companions you just met.

What do you think will be emerging trends in 2012?