It is sometimes hard to explain to someone who hasn’t eaten it just what makes a good Chicago style pizza. Most people just think that it’s any style of deep dish pizza. But real Chicago pizza can be so much more.

There are three or four local pizza chains in Chicago that are well known for Chicago style pizza. Probably the best known and most often cited as the place for that style of deep dish pizza is Gino’s East, located just off Michigan Avenue in the Downtown Chicago area called Streeterville. But you can also get really good pizza at Portillo’s, in the River North neighborhood, Pizzeria Uno and its offshoot, Pizzeria Due (pronounced the Italian way, doo-ay). Leona’s, which has a few restaurants in the area, also makes some good pie. 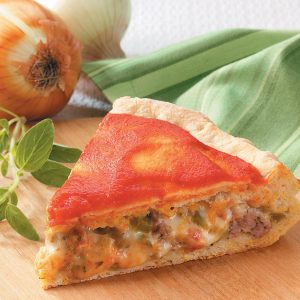 And then there’s an extreme version of Chicago style pizza called Stuffed Pizza. This is not stuffed crust pizza that you’ll find in a major national pizza chain but stuffed pizza. Similar to Deep Dish, it has a slightly thinner crust and a lot more toppings. It also has a top crust, like a fruit pie. A deep dish pizza has all the usual toppings in the same way you would have them on a thin crust pizza except the tomato sauce goes on top to keep the cheese from burning. But a stuffed pizza has all the toppings stuffed into the body of the pizza.

Another difference is a deep dish is usually cooked in a skillet. But the best cookware to use for a stuffed pizza is either a very large pan, like a big pizza pan with a high lip or a large casserole like a 9 x 13-inch dish. You might think that would make the corners overcooked. But the amount of stuffing keeps them from cooking faster than the rest of the pizza.

And finally, we have to talk about what goes into the stuffing. The big difference is the order in which you must layer the goodies. A regular pizza has the tomato sauce on the bottom and the cheese on top. But you can’t do that to a stuffed pizza because the cheese would burn. So, you put the cheese on the bottom layer, right on top of the crust dough. Then you add the other things you like on your pizza, like sausage, mushrooms, pepperoni or other vegetables. Then a top crust and top the whole thing off with a solid layer of tomato sauce, making sure it goes all the way to the edge of the dough around the sides.

You start with a homemade pizza crust dough. In a small bowl, dissolve 2 teaspoons sugar in 1 cup warm water; in a separate small bowl combine one teaspoon active dry yeast, 1/2 cup flour, and 1/2 cup warm water. Mix together and let rest in the bowl for about 20 minutes, until foamy.

Meanwhile, in a medium bowl mix together remaining 2 1/2 cups flour with 1/2 cup cornmeal and 1 1/2 teaspoons salt; remove half of this mixture from bowl and stir 1 cup sugar water into the bowl. When well mixed, return second half of flour/cornmeal mixture to the bowl and mix all together; then stir in yeast mixture. Knead dough on a lightly floured surface until smooth and elastic, about 8 to 12 minutes. Place dough in a lightly oiled bowl and cover with plastic wrap. Let rise in a warm place until doubled in volume. 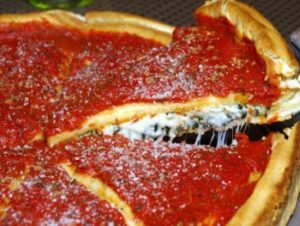 Obviously, you can modify the stuffing to meet your personal taste.

Press half of the dough in the bottom and up the sides of a lightly greased deep dish pan. Bake crust in preheated oven for 4 minutes, then add the stuffing mixture to the bottom crust and cover with top crust; seal edges together with fingers, and trim excess. Slit top crust to allow steam to vent during baking; top with 1/2 cup herb-laden tomato sauce.

Bake on lower rack at 450 degrees F (230 degrees C) for 45 minutes, or until crust is golden brown. Remove from oven and allow to cool for 5 minutes, then cut and serve. Usually, one piece with a salad makes a full meal. In fact, for most, this one pizza will feed you for several days.

Go for something different, a pizza that’s a real pie. Make sure you have plenty of cheese, that’s the best part.