“The wonderful thing about soup is that it’s easy to make, it tastes good and you can make a lot of it to last all week.” That was me talking to my friend the other night after we had a delicious dinner of soup and my homemade Southern style cornbread. 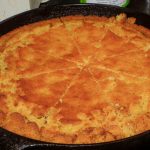 I’ve talked about my cornbread recipe before. You’ll find it on our Recipes Page. I did make some alterations. Making little changes to meet your circumstances is part of the fun of cooking. This time, we had some leftover buttermilk in the refrigerator, so I used that for the milk in the recipe. It added a little, barely perceptible tang. And since we didn’t have any bacon, I just used olive oil. It worked just fine.

Also in the refrigerator, in the freezer section, was a package of ground beef that had been there for a month or so. Food in the freezer usually doesn’t last forever. Most things can stay in the freezer for anywhere from a few weeks to a few months. But once you get over six months, you run the risk of most foods suffering from freezer burn and other problems. There are fluctuations in the temperature, power and content, all of which can affect the freezer’s conditions which affects the food stored there, even when you do all the right things to protect them.

As usual, we also had a few other basics in the pantry: potatoes, green pepper, celery, low-fat milk, flour, chicken broth and onions. So, with just a couple of things from the store, I had all the making of 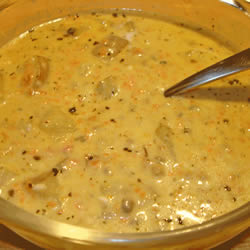 In addition to what I had on hand I had to pick up at the store a carrot, a block of cheddar cheese and a container of light sour cream. Here’s the total ingredient list:

Be sure you taste this before you serve it. As mentioned, my recipe doesn’t use any extra salt, but you may find it too bland. This produces at least 8 hearty bowls with about 28 grams of fat and 22 grams of carbohydrate. That’s why I like to pair it with just a little bread and a nice salad. Keep the fat content low by using the olive oil instead of butter, you won’t notice any taste difference.

This soup is good enough to eat all week long. Make plenty of salad. It makes for a very satisfying meal in The Bachelor’s Kitchen.