Take any fried dough to lunch!

June First is National Donut Day. So, don’t forget to stop by your friendly neighborhood donut shop for some of these delicious and popular confections.

In many ways, donuts are an American icon. But they are hardly just an American invention. Also, donuts are changing all the time. They’ve often been a sweet dessert. In more recent decades, they’ve become an essential breakfast food. But some adventurous chefs are now making more savory versions, taking the humble donut to new heights and territories.

A donut, or doughnut, is a type of fried dough. These are usually deep fried and made from a flour dough. They usually come in two basic shapes: rings and filled. Filled donuts can be just about any shape, as long as there’s plenty of room inside to hold the filling. 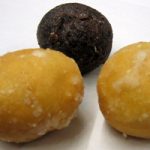 Sometimes the center of the ring donuts are also cooked and served as the donut hole. Other shapes include twists, spirals, long rectangles and freeform fritters.

Exactly where donuts began no one seems to know. Some say Dutch settlers brought them to the colonies. The first published mention is in an English cookbook of American recipes. By the mid-19th century, donuts were considered an American food.

In India, there are several snacks and pastries consisting of dough, usually fried in clarified butter. Indonesia has a potato donut, a ring-shaped fritter made from flour and mashed potatoes then coated in powdered sugar. The Japanese donut is made from bean paste. Malaysia makes it’s donut from mashed sweet potato. And in Nepal, it’s made from rice flour.

Doughnuts are available at most bakeries across Pakistan. The Navaz Sharif variety, available mainly in the city of Karachi, is covered in chocolate and filled with cream, similar to a Boston cream. It costs twice the price of a regular variety and is meant to “make you corrupt” if you eat it. Doughnuts can readily be found at the many Dunkin’ Donuts branches spread across Pakistan. 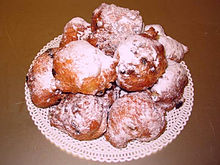 Throughout Europe, most donut equivalents are served around Carneval season, or Lent. These are typically filled in fruit jam or vanilla cream. There are Czech Republic “American” style doughnuts, but before they were solid shape and filled with jelly (strawberry or peach). The shape is similar to doughnuts in Germany or Poland. They are called Kobliha (Koblihy in plural). They may be filed with nougat or with vanilla custard. There are now many fillings; cut in half or non-filled knots with sugar and cinnamon on top.

In parts of Germany, the doughnut equivalents are called Berliner, but not in the capital city of Berlin itself and neighboring areas, where they are called Pfannkuchen(which is often found misleading by people in the rest of Germany, who use the word Pfannkuchen to describe a pancake, which is also the literal translation of it).

On and on it goes around the world. Sadly, fresh donuts are harder to find in the U. S. than they used to be. Corner donut shops have mostly disappeared, replaced with grocery store products and national chain shops.

So, just this once (or twice) you can celebrate the donut and eat a sticky, sweet one. Just don’t get carried away.