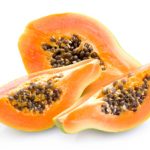 All papayas recently produced under four different brand names have been recalled due to possible contamination of salmonella. While none of the suspect fruit have been sold in the United States, tests show the strain of bacteria causing the recall is the same that affected nearly 100 people in nearly half of the states.

. The company is recalling all the papayas shipped before July 23.

The two shipments that tested positive for the salmonella strain weren’t distributed in the U.S. Still, the agency says people shouldn’t eat the company’s papayas. The FDA and the Centers for Disease Control and Prevention are investigating the salmonella outbreaks. And the FDA along with Agromod and Mexican officials are trying to figure out how the papayas were contaminated in the first place.