We were reading an article written by Top Chef Hugh Acheson for Epi-Log, the food blog operated by Epicurious magazine. It’s worth the read (just follow the link). At first glance, it’s about the changes in local community cookbooks. But ultimately, it is about the decline of cooking prowess in the American South. We believe this decline can be seen all across the country.

Part of that loss of skill and knowledge is the reason behind The Bachelor’s Kitchen. The goal here is to help people, especially singles, especially kitchen-averse men, to learn to cook and learn to enjoy it, as I have.

Acheson was looking at two community cookbooks, ten years apart, and noting the differences. You’ve probably seen these years ago, the local church ladies’ cookbook or the boy scout troop moms’ cookbook. There’s no fancy photography, just home recipes you would find on any family table. Acheson maintains that sometime between 1961 and 1971, the knowledge of the home cook, as well as the type of ingredients used, changed.

What we found interesting was that it appears Acheson is on to something. For example, he quotes from one recipe in the 1961 book that has no measurements, no precise times, and nothing but local, wholesome ingredients. The recipe is entitled simply “Birds.” It doesn’t say what kind of birds, although it is believed to apply to hunters’ bounty.

“Dress birds whole. Never skinned. Stuff with buttered crumbs and pecans. Dip them in flour and brown in butter. Place birds in casserole. Pour browned butter over them, to which a little water has been added. Add 1/8 c. sherry for each bird. Cover and bake slowly, about 300 degrees, until tender, about 2 hrs. or more.”

The ingredient list that accompanies this recipe is equally simple.

That’s it. You’ll note it doesn’t even mention salt or pepper. Why? Because the writer assumes you know to season the birds.

“The reader is clearly thought to have a culinary skill set, similar to the way I would communicate an idea to one of my cooks at the restaurants. There are no measurements, no precise times, and many “abouts”. The recipe doesn’t even say what kind of birds are being cooked.

“Even though this recipe would make my editor’s red pencil jump into a state of crazed correction, I like it. I understand the results. I know the aims. I get the nuance of the language, the purposeful vagueness. It is a recipe written by someone, Mrs. Sam Zimmerman, Jr., who knows that you know how much flour to dredge a small bird with and will not bore you with such triviality.”

Then, Acheson compares that to a community recipe from ten years along. Oh, what a difference that time makes. 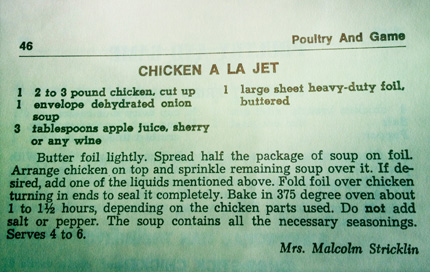 Notice that the amounts and instructions are more detailed and has greater reliance on convenience food items.

“So in a decade, the Southern regional recipe audience still knows how to butcher a bird but is now beholden to dehydrated soup mixes.”

That leaves us with a question. How do most of our readers prefer to get their recipes? Certainly, I am aware that most of us like the traditional format: list ingredients, give step by step instructions, don’t list equipment needed and add in cooking times, number of servings and nutritional information. But there’s another way to present a recipe.

We are considering, since we have a Recipes section, doing a more narrative form post of the recipe and the cooking in the main section. We would enjoy some feedback from you readers. Is the narrative style too much? Would it intrigue you enough to go to the Recipes section to download or print it?

If you have been with The Bachelor’s Kitchen from the beginning, you know I wasn’t trying to create a recipe site. But I quickly saw that was what many readers wanted. So, we added the section while trying to keep the main posts about other things.

Please give us your comments.