A year ago, many school districts responded to public outcries about the quality o ooh being fed to our kids. This food revolution was being led by British chef Jamie Oliver

. While it was not successful everywhere, Oliver succeeded in pointing out that schools could and should do better. He also found that federal government regulations was one obstacle facing American schools in their lunch and nutrition programs.

But that changed when the government changed those standards, allowing and encouraging schools to make healthier, fresher food available to school children. $11 billion reimburses schools for the meals they serve and gives them access to lower cost foods.

Now, however, some school districts are dropping out of the new federal lunch program. 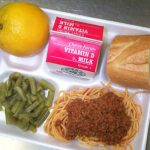 They say so many students turned up their noses at those meals that the cafeterias were losing a lot of money. They also say the reimbursement from the federal government is not enough to offset the losses.

In some districts that have left the program, school chefs have developed their own better menus, like salad topped with flank steak and crumbled cheese or pasta with chicken and mushrooms. But other districts have gone back to fish sticks, and burgers. Students complained about small portions, so many schools are serving larger amounts, like yogurt with a banana, not one or the other. 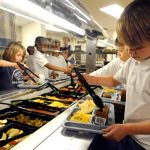 But government officials say it’s not a big failure. Doctor Janey Thornton of the USDA, says there’s a big difference between the school districts that have dropped out of the program and the number which have threatened to drop out.

“The vast majority of schools across the country are meeting the updated meal standards successfully, which is so important to help all our nation’s children lead healthier lives. Many of these children have never seen or tasted some of the fruits and vegetables that are being served before, and it takes a while to adapt and learn.”

Many school officials say the biggest problem is the serving size and calorie limits in the National School Lunch Program just did not provide enough food. They report many kids going to convenience stores after school for junk food to fill up before after school activities like sports. The government responded by relaxing some of the restrictions. But even with higher limits on servings of grains and fats, many school officials are continuing to field complaints. While some schools cannot afford to drop out of the program, others are considering their options.