One of the challenges for single cooks is how to make a small amount of food when most recipes are scaled for several more people. Our answer in The Bachelor’s Kitchen is to go ahead and make enough for several meals that can be kept in the fridge or frozen for later eating.

But a recent article in The Atlantic magazine gave us another great idea. The story by Emily Badger featured a new operation in New York City, allowing people to share meals with complete strangers. 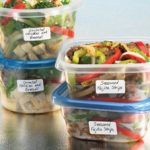 It’s called Mealku. Some of you may be familiar with neighbor meal swaps. This is the same idea, but can be performed across a whole city with people you’ve never met.

Mealku founder Ted D’Cruz-Young used bicycle messengers to deliver the meals between thousands of families around New York. This allows some homes to get a free meal once a week while supplying someone else with the same on some other day of the week. It’s part of a growing trend of groups of people, often strangers, sharing something instead of buying it.

The idea turns your leftovers to someone else’s fresh dinner. After all, no matter how tasty your food might be, you don’t want to eat it every night.

How can you do something like this? Easy. You can start by getting together with co-workers or friends and start your own meal sharing group. Draw names and then find out what the other person likes and tell them what you like. Then let the fun begin. Pick a day to cook and a day to receive. It could open a whole new world for you. It’s like dining out without going out.