America’s great poetess Maya Angelou’s death was reported this morning. She was 86. She overcame many obstacles to become one of our nation’s great writers. But she was more than a great poet, she was also a good cook. She even wrote a cookbook. In her honor, we are proud to repost our article about Maya Angelou’s cooking.

A new year has begun and perhaps you’re one of those folks who make resolutions. Well, I could talk for a bit about that, but that’s not what this blog is for. We’re here to talk about food and cooking and how these things can affect your health.

Throughout this time in The Bachelor’s Kitchen, I’ve tried to instill in our readers the idea of doing more of your own cooking from scratch. Why? Because it’s cheaper, healthier and more fun. Somewhere along the line, especially for bachelors, we’ve lost the love of good food. We see it as fuel. A lot of that has come from the medical community which has failed to understand the real role of food in our lives. Every culture on the planet, including every civilization that has ever existed, has had food as a central part of that culture. But here in America, we have become so separated from our food that we no longer understand its place in our way of life. Thus we have an epidemic of obesity, heart disease, diabetes and other diseases directly related to food and eating habits.

I know these things from my own personal experience. I know exactly how many bachelors and young singles eat because I remember what I used to do. I also know now the price that we have to pay because of those eating styles. We put too many things ahead of taking care of ourselves, without realizing the important things that we have lost along the way.

I was reminded of these things in hearing a recent interview with the famous writer and poet Maya Angelou. She was a guest on NPR’s Morning Edition talking about her newest cookbook, 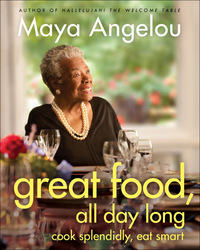 Great Food, All Day Long; Cook Splendidly, Eat Smart. The book is a compilation of dishes she has picked up in her travels around the world.

“I cook in different languages.”

Angelou says we Americans rush around too much. The time spent cooking and eating good food should not be seen as unproductive, but rather a time to nourish more than our bodies. She recalls how when she was growing up the dinner table was more than just a place to chow down.

“I’m concerned that Americans are losing that place of meeting,” she says. “There are very few times we can be more intimate as to share food together.”

She also points out there are too many rules about what to eat when.

“You can eat anything at any time. Who made the rule that you have to have eggs in the morning, and steak at night?”

Isn’t that what I’ve been saying? Remember, I told you about having vegetables, other than just potatoes, for breakfast? That’s what she means about rules. I’ve also pointed out that recipes are meant to be guides, not law.

That doesn’t mean that you can’t learn from those recipes. And you can learn more than just how to cook a particular dish. Angelou recommends her readers upon picking up her book, take a little time to get to know it, to get an overall impression of the book.

“First, sit down. And give yourself a half-hour to read something. Have more patience with yourself.”

In short, take time to enjoy your food, don’t be afraid to explore the remarkable foods from around the world, don’t feel limited by rules. Reconnecting with our food can lead to greater enjoyment and healthier eating.