Lots of people are urging us to eat more vegetables. If you’re like me, you might not find a lot of vegetables very good raw. At least not without heaps of Ranch dressing or something.

Many of you may not be that familiar with cooking vegetables. So, here are some ideas. We’ll be looking at how to cook several common vegetables over the next several posts. 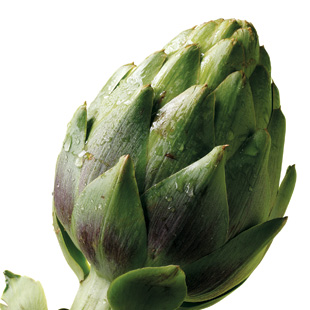 Artichokes. If ever there was a food that looks unappealing, it’s the artichoke. This is the flower of the thistle plant, a common weed. The globe artichoke, the one most of us are familiar with, is grown mostly around the Mediterranean, especially Spain and Italy. In the U.S., all artichokes come from California, mostly around the town of Castroville.

Artichokes are usually harvested in the spring, but another peak harvest time is mid-autumn. The California artichokes are harvested continuously through the summer.

When shopping for artichokes, look for full but small heads with no brown spots. The leaves should be tight and not easy to pull off. The rule is the smaller the better.

Trimming takes a little time but is easy. Take your kitchen shears (You do have kitchen shears, don’t you?) and remove the tough outer leaves closest to the stem. Then snip off the pointy ends of the outer leaves so its easier to handle. This is a thistle, remember. Wash thoroughly by turning it upside down in clean water. Trim off most of the stem so it sits flatter, but take care not to damage the base, which holds the whole thing together. Rubbing a halved lemon over the trimmed leaves, or bracts, will keep them from browning before cooking. 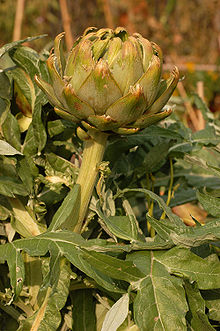 Most commonly, we see this leafy head steamed. Just put a steamer basket in a large pot with about two inches of water in the bottom. Steam the trimmed artichoke for about 20 minutes and you’re done.

In addition to steaming, there are lots of ways to cook this funny looking vegetable. Usually, you’ll like it best with a melted butter dip. When serving, keeping it in its own bowl works best. You should have another bowl on the table to discard the outer parts of the leaves after the good bit has been scraped off.

The part of the vegetable that’s edible is the meaty base of the leaves and the inner base, called the heart. Above the base, buried under all the leaves, is the choke. You can take a spoon to scoop out the feathery, fiberous choke if the thing has been cooked well. But be careful. The choke is called that for a reason, so you should try to remove all of the fibers.

Personally, I think it’s a lot of work for the amount of edible food you get. But I have to admit that heart, once you reach it, seems well worth the effort. That’s why pickled or jarred artichoke hearts are so popular, especially on a salad.

Another popular cooking method is braising. This is best done with baby artichokes. Just cook in a large skillet with some olive oil. After a minute or two add a cup of white wine, a cup of water (two cups of water if not using wine) and a teaspoon of dried thyme, rosemary or tarragon. Cover and cook for about another 15 minutes. Artichokes are done when you can easily insert a knife into the base. 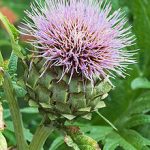 To grill artichokes, open up the center of the head to scoop out the choke. Cover with extra virgin olive oil and kosher salt. Grill over medium-high heat until tender.

Round vegetables are great in the microwave. Just placed the trimmed artichoke in a glass or microwave safe dish. Add 1/2 cup of white wine or water, some dried thyme and salt. Cover tightly with plastic wrap using a toothpick to make a very small hole near the dish side so it doesn’t explode. Microwave on high for about 8 minutes for an average size artichoke. Be careful removing the plastic as the steam will be very, very hot.

In addition to cooking and eating, artichokes make colorful houseplants with a brilliant bloom. You can also make a herbal tea. If you’ve ever had the Italian liqueur Cynar, that’s flavored with artichokes. A chemical compound in the leaves is a useful diuretic which also aids in liver function and lowering cholesterol.