Martha Stewart says home cooking is now fashionable. Soon, we hope to see vegetables become the new little black dress or, for some men at least, the basic blue suit. If you’ve been reading The Bachelor’s Kitchen, you know I recently did a series of posts about cooking vegetables. 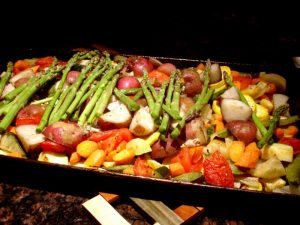 Recent studies have time and again indicated the health benefits of vegetarian and vegan diets. As meat and protein became a larger part of our meals, vegetables seem to have gone by the wayside. We’ve gone too far in that direction. Americans eat way too much meat, more per person than any other country in the world. It’s time to bring back the joy of cooking and eating vegetables and put meat back in its place. I’m not saying we should give up meat. I’m just saying we need to cut back. 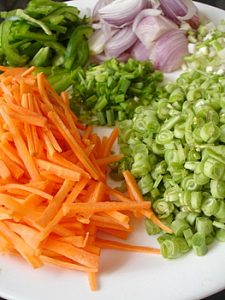 One of the problems is that many people, myself included, may know many ways to prepare various cuts of meat, poultry and fish but are clueless in coming up with new ways to cook vegetables. And that’s why I explored the issue.

I’m not the only one exploring a new world of veggies. More and more gourmet chefs are seeing vegetables as much more than a side dish. More are offering vegetarian entrees that go beyond heavy starches and bland beans.

Here’s an important step that many people moving toward vegetarianism often forget. Let vegetables shine on their own. That sounds simple enough. But many people first seek to replace the meat instead of doing without it. Veggie burgers and other meat substitutes are okay and can be one way to take some of the meat out of your diet. But if you look at the ingredient list, you’ll see it’s usually loaded with things you can’t identify or pronounce. I wonder if that’s not jumping from the frying pan into the fire.

The problem is that we are trying to replace meat rather than enjoy meals without it. Let me give you an example.

I’m trying to incorporate more beans and greens into my diet. That includes more salads. But it also means learning how to cook beans in an interesting way and learning which beans I like. One tip I’ve learned is cooking my own beans instead of using canned. Not that there’s anything wrong with can beans except for all that salt. If you have a slow cooker, a bag of dried beans becomes a cinch. So, I had put an old ham bone I had stashed in the freezer for just this purpose into the cooker along with soaked beans, celery, onion, garlic, herbs and spices. I didn’t add salt until the beans were nearly done and then it was in the form of Worcestershire Sauce and chicken bouillon. Then I served it over some leftover rice and added a few drops of Sriracha, an Asian chili sauce. Yum!

While this wasn’t strictly vegetarian because of the ham bone and chicken bouillon, the meat was used as a flavoring, not the main ingredient of the meal. This easily can be augmented with all sorts of vegetables like peas, broccoli florets or whatever you like.