It’s time to continue our series on cooking vegetables. If we know how to cook them, we might eat more of them. Today we look at squash.

The term squash refers to a large group of plants that includes a wide variety of shapes, colors and sizes. They are actually a fruit and originated in Mexico and Central America. Gourds are also in this family.

Squashes generally are divided into two categories: winter and summer squash. Some summer squashes are zucchini, pattypan and yellow crookneck. Winter squashes include pumpkins, spaghetti, butternut, acorn and others harvested in the late summer and through the fall. Summer squash are usually picked earlier when their skins are still soft. Summer squash can be eaten raw. If cooked, they require only a small amount of preparation. Winter squash are hard and must be opened to get to the edible flesh.

Shopping: Look for squash that are firm with unblemished skin and no mushy spots. The color should be fully developed for that particular variety.

Preparation: Because summer squash are younger and less developed, the seeds inside usually can remain. Also peeling off the skin is usually a matter of taste. Some, like yellow squash, should have the skins on as it helps the pieces retain their shape. Winter squash should be split in half with a very sharp knife. The seeds are scooped out. Keeping the skin on allows them to be used as their own cooking vessel. You can also cut off the skin to cut the inside to smaller portions for cooking. 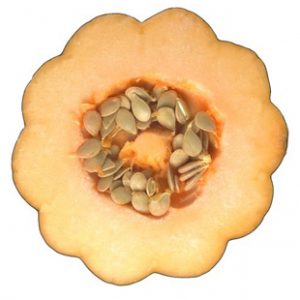 Acorn squash can be cut into cubes and braised in apple juice. It can be sautéed in a little olive oil. To microwave, put the pieces in a glass dish with a half cup of water, cover and cook on high for 15 minutes.

Butternut squash can be trimmed and cut into slabs and baked like oven-fried potatoes. It’s also a popular soup ingredient. Cubes of butternut squash are cooked in chicken broth until soft and then puréed and brought together with cream.

Spaghetti squash gets its name because after cooking the flesh resembles strings of pasta. Split the squash in half and put them flat side down on a baking sheet for 15 – 20 minutes in a 375º oven. When the pieces cool down enough to handle, use a fork to scrape the flesh into long strands. These can then be treated the same way you’d use spaghetti or other noodles.

There are countless recipes for using zucchini, from oven-frying to pickling to bread. 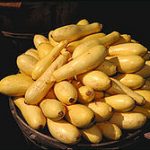 Yellow squash is usually sliced into discs or cubes and then sautéed, steamed, boiled or mixed with other vegetables. It can be cut lengthwise, dabbed with olive oil and grilled.

Sauté Delicata squash and then spice with a little nutmeg.

Use a little imagination and come up with your own ways to cook squash in The Bachelor’s Kitchen.