Let’s see. We have spices and herbs, salt, oil and dry goods. I guess it’s time to talk about canned goods.

There are a lot of canned goods I don’t like, especially green vegetables. They just seem to come out gray. But there are good canned good items that are very useful. There are other goods which I think you should have on hand for emergencies, but we’ll address that later.

What makes these canned goods Pantry Basics is that they can be used for so many things. Versatility is always a key Bachelor Cooking concept. I realize this selection probably only scratches the surface, but you have to draw the line somewhere.

Chicken broth. This is very useful. Now, if you’ve been reading this blog, you know I’m a fan of homemade chicken broth or stock. It’s easy and then you know exactly what’s in it. More importantly, you know what isn’t in it, like preservatives and lots of salt. I use it to make all kinds of things, from rice to soup to sauce. What’s the difference between broth and stock? Stock uses bones in addition to meat and seasonings. The collagen derived from the bones gives stock a different texture and will cause cold stock to become a bit gelatin-like. Stock has no bones and so is a little thinner. Keeping a can of broth around means you can whip up lots of different, flavorful foods at a moment’s notice.

Tomatoes. This is one of those canned items I think is often better than fresh. Unless they are homegrown, organic tomatoes, most of what you get in the produce aisle are just awful. Too often, fresh tomatoes come from a long way away. That means they have to be picked while still green and hard. Tomatoes will develop more red color and get softer after being picked, but they never develop more flavor. That’s why homegrown taste so much better. If you can grow your own, and you might be able to do that even in an apartment, you’ll notice a big difference. Can tomatoes are allowed to stay on the vine longer because they don’t have to travel so far. Processing plants are usually close by the fields. That means the tomatoes in the cans are usually at their peak of flavor. Cooking during the canning process does take a little of the flavor out. Try to buy tomatoes packed in juice or puree and with as little salt as possible. You might also want to keep around some tomato paste. This has a lot of tomato flavor and can be made into sauce or just used as a seasoning.

Beans. Dry beans cost almost nothing and they’re not difficult to prepare. But they do take a lot of time because they have to soak overnight. Also, depending on the type of bean, they can get tough during cooking. That’s why I like canned beans. The only real advantage of dried beans is the incredibly cheap cost. There are a wide variety of beans available. I recommend always having on hand black beans, red kidney beans and some type of white bean like cannelloni or Great Northerns. ALWAYS DRAIN AND RINSE! You never want that gunk that the beans are packed in. It won’t kill you but it doesn’t taste very good, either. I pour my canned beans into a strainer and then rinse under cold running water. Rinse even those beans for chili that come in some sort of spicy gravy. Just use red kidney beans and add your own spices.

Tuna. There are a lot more canned meat choices than you might think these days. And some of them are actually useful under certain circumstances. But can tuna is an American staple. It’s a good source of protein and can be used for more than just tuna salad or tuna casserole. Usually, you should buy the tuna packed in water. White tuna, like albacore is a better quality, but it also costs more. Tuna packed in oil, especially olive oil, is great as a salad topper because it has more flavor without a lot of added fat. If you’re concerned about mercury poisoning, don’t worry about can tuna. Mercury gets into the bigger, older fish, like Yellowfin and Bluefin. Nearly all can tuna is Skipjack tuna, a smaller fish that only lives a couple of years. It is therefore less likely to be contaminated. Just don’t eat tuna every day.

Spaghetti sauce. I’m a little less likely to recommend this one because while it makes a quick meal and there are some good, organic brands available without a lot of preservatives, it encourages eating too much pasta. A big plate of pasta is cheap, quick and filling. But remember this is like eating a bunch of bread. Would you really sit down to eat half a loaf of bread even with tomato sauce? Still, you can always throw together a meal with a jar or can of spaghetti sauce and some dry pasta. 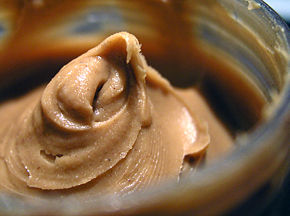 Peanut Butter. Not every one likes peanut butter. And some people have severe allergies to nuts and this one in particular. But if you like and can eat peanut butter, it’s cheap and makes a lot of sandwiches, can be spread on fruit or crackers, used to make some interesting Asian style sauces and goes well with sweets. It is a native American food going back to the Incas.

As always, you will need to adjust this list for your personal taste.