We know a lot of cooks, professional and amateur, who will say bacon 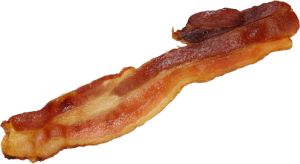 makes anything taste better. We’re not against using bacon from time to time to set off a dish or to make some great food. But it’s not just the fat content that’s a problem with this popular breakfast meat. Use should definitely be limited.

You’ve decided you need bacon and now you’re standing in front on the bacon section in the store’s meat case trying to figure out what to buy. Price is not the real concern since most bacons are made in one of two ways. While one is more cost efficient, it’s used more for high volume than low cost. Price or thickness of slices really have little to do with the taste. 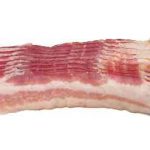 So, what does matter? It’s which method to produce the bacon that makes the difference. Taste-wise, the only factor that seems significant for most people is the use of nitrates. You’ve probably heard somewhere that nitrates are bad. But we’ve come to like nitrates in bacon and find it just doesn’t taste right without it. It doesn’t look right, either. That’s because nitrates help keep the color and add to the cured flavor of the bacon. Pale, mild bacon just isn’t that popular. Eating bacon everyday will be a problem. 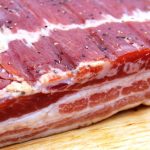 Have you ever wondered what all those pork bellies are used for? This is it. Obviously, turkey or tofu bacon isn’t included in this, but then we’re not sure those are really bacon. When the pig’s belly is removed and trimmed you have a slab of raw bacon.

The method most of us think of when we look at bacon is the smokehouse method. The slab is prepared with a dry rub of salt, sugar and spices. Then it is hung in a smokehouse or similar thing and partially cooked for a long period, up to a week. The salt and smoke are believed to make the bacon impervious to bacteria and other contaminants.

The more common method used by the big pork producers involves lots of chemicals and might be called “wet curing.” In this method, the slab is injected with a curing solution containing lots of salt, liquid smoke, sugar or sweetener (like corn syrup), sodium phosphate for moisture retention during processing and cooking, sodium ascorbate or sodium erythorbate to accelerate the curing process and promote color retention, artificial flavorings such as maple and a curing salt that includes sodium nitrite to stave off bacteria and set flavor and color characteristics. The cure is then allowed two or three hours to take effect inside the slab. The bacon is then hung and brought up to a temperature of 130 F. Real smoke may or may not be used depending on the producer.

In either case, the slabs are then cooled, flattened, sliced and packaged. 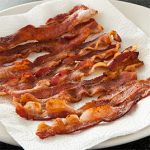 When choosing bacon, go for a package showing as much meat as possible. If you want more fat, try looking into salt pork, an uncured product that is very similar but has almost no meat. The thickness of the slices has no effect on the taste, but some people might feel the thick-cut bacon has a meatier flavor. Also, some people like a sweeter, more syrupy flavor, but remember that means more sugar.

Enjoy bacon, but not too much.