Do you find yourself reaching for the same spices over and over when cooking?  I know I do. And if you haven’t explored the world of spice, it’s high time you do so. In fact, we’ll be looking more closely at spices in a new series of posts coming in a few weeks.

Many cultures around the world have their own versions of spice mixes. Some are in the form of sauces rather than dry spices. All are designed to add flavor to the food you eat. That’s particularly important today for Americans trying to cut back on fat and salt while keeping good flavor.

In China, for example, there’s Five Spice Powder. There are many variants but all are made of five spices in order to comply with the Asian concept of balance. The most common mixture is star anise, cloves, cinnamon, Sichuan pepper and ground fennel seeds.

In India and South Asia, there are Marsalas. These spice mixes vary not only from region to region but from family to family. Garum marsala 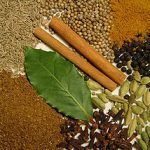 is one of the most well known. Hailing from Northern India, this mixture contains peppercorns, bay leaf, cloves, mace, cumin, cinnamon, coriander, cardamom, star anise and nutmeg. The word garum means spicy, but in a pungent way rather than hot.

In France, we have Herbes de Provence 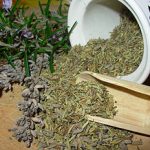 , a combination of herbs typically found in the Southern France region. However, today this is a generic term for a blend of French herbs. There are variations on the mix, but generally it contains savory (an herb not much used these days), fennel, basil, thyme and lavender (which is not found in traditional French cooking).

In Latin America there’s Sofrito, a mix of onions, herbs, peppers and garlic. Technically, sofrito is a sauce that includes tomatoes.

Here in the U. S. we have a multitude of spice blends going back to the early days of the country. One of the oldest is chili powder 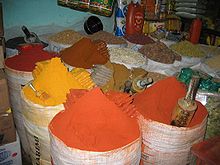 , a mix of cumin, cayenne, dried chilis, garlic, oregano and salt. We think of this as an ingredient in Southwest or Tex-Mex cuisine, but it’s also found in Indian, Chinese and Thai cooking.

Another oldie is Seasoned Salt, made popular in this country by Lowry’s Steak House. This is found in many English-speaking countries. It combines table salt with various spices such as celery salt, monosodium glutamate, garlic powder, onion powder and paprika. Other seasonings can be added, too.

Curry powder is another spice blend that can vary widely. Most contain turmeric, cumin, coriander, fenugreek and red pepper. Other common blends are apple pie spice and pumpkin pie spice.

You can create your own spice mix. Here is the one we use in The Bachelor’s Kitchen. Try it and personalize it to your own tastes.