We’ve talked a lot about coffee recently. It seems only fair we should give its friend tea some time as well. 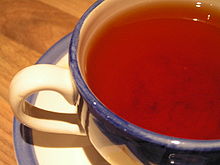 We’ve been drinking more tea these days in The Bachelor’s Kitchen. We have a cabinet full of teas, cups, infusers, a teapot and a kettle. We have black teas, green teas, Chinese tea, Indian Chai, fruit teas, herbal teas and matcha.

Tea is thousands of years old, believed to have originated in Yunnan province in South Central China. It is the oldest drink in the world, besides water. There are four basic types of tea, all from the tea plant, Camellia sinensis. Black, green, white and oolong are the only true teas. Herbal teas are really called tisanes (pronounced tih-ZANES).

The tea plant grows primarily in tropical places, although it can also grow in seaside climates such as in Washington state. Better teas grow at higher elevations. Only the top leaves of the plants are plucked and used.

Tea was given to Europe by Portuguese priests working in China in the 16th century. It was introduced to the British in the 18th century but took a long time to become popular. The British introduced the plant to India in hopes of competing against Chinese tea.

All teas contain caffeine, even those that are decaffeinated. Herbal teas, or tisanes, are made from herbs, flowers, tree bark, seeds or roots. Unless the plant those materials come from contain caffeine, most tisanes are caffeine-free. 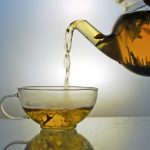 Basically, a tea is made by pouring hot water over the leaves of tea, called an infusion, and allowing the leaves to steep in the water for several minutes. Black tea should be made with near boiling water while cooler temperatures are needed for more delicate teas. Most tea leaves can be used for multiple infusions.

Tea leaves have to be dried immediately after being picked. Otherwise the leaf darkens, creating black tea. This is called fermentation, but has nothing to do with the process of developing alcohol. Most teas are blends of different leaves and processes.

It was first used as medicine. The health effects of tea are still being explored. It is known that tea contains several bioactive chemicals and flavinoids which can help reduce risk for some cancers and heart disease. But it is not a miracle cure and will not help people lose weight. 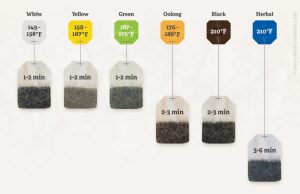 A number of additives can be added to tea, both in the processing and in the serving at home. One of the most common additives is milk and sugar. Others are combined with flavoring agents, such as bergamot used in Earl Grey, or a combination of spices such as in Masala Chai. A shot of citrus juice, like lemon or orange, can not only enhance the flavor but preserve some the healthful flavinoids.

Different pouring methods are employed by different cultures. Some are strained, others are poured from a height of several feet to create a foam and a different flavor. Some cultures have developed a ritual around serving tea. In America, most tea is served cold and sweet.

Tea is good for you and should be a part of your daily fluid intake.