Some of you may have worked or now work in a restaurant or some other late night job. 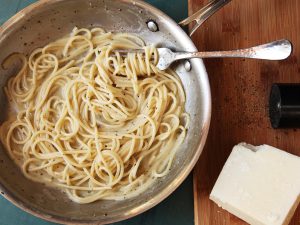 The last thing you want to do is cook dinner when you get off work. People in the restaurant industry face this dilemma most evenings. Fortunately, they also have people around who know how to cook. If that’s the case, you probably have eaten Cacio e Pepe, or Pasta with Black Pepper and Pecorino Romano.

Like rice, this is a dish that is very simple, but also takes practice to get right. On the face of it, it looks like one simply cooks some pasta, usually spaghetti or other thin noodle, then tosses it with extra virgin olive oil, freshly ground black pepper and some grated Pecorino cheese. If you get it right, it is delicious and loaded with protein and carbohydrates, just what you need at the end of a long night. But if you don’t get it right, it turns into a clumpy, greasy mess.

Another thing we like about this recipe is that it can be dressed up if you have some left over meat or other protein, or it is good on its own the next day if just take the chill off after spending the night in the refrigerator.

So, if your first try at this dish fails, keep trying, it’s worth it.

Start with medium skillet over medium-low heat. This recipe only makes two large servings, so you won’t need a big pan. Heat about three tablespoons of olive oil in the skillet. Add a teaspoon or more of freshly ground black pepper. You can just use the grinder over the pan until you see a good amount in the oil. You just want to warm it up so it becomes wonderfully fragrant. A little sizzling is to be expected. Take the pan off the heat and let it sit.

Next, you need either a large skillet or a wide saucepan. Place the spaghetti or pasta in the pan and add just enough water to cover. Season with a pinch of salt. Over high heat, bring the pan to a boil. Give it a little shove around the pan from time to time to keep it from clumping. Follow the package directions for al dente, pasta, usually about one minute less than the recommended time.

Take two to three tablespoons of the pasta water and put them in the medium skillet containing the oil and pepper mixture. Add two tablespoons of butter to that and stir it all together. Take tongs and transfer the pasta to the smaller pan. Add about one cup of grated Pecorino Romano. Use a fork to stir in the cheese until it is all melted. Use a little more pasta water if needed to get a creamy sauce that coats all of the pasta. Taste to adjust seasoning, adding a bit more salt and pepper if needed. Then take the whole pan to the table and serve directly on to plates. If you have a guest, be sure to offer extra grated cheese and black pepper.

You might not be familiar with pecorino cheese. If so, you will find it very similar and sold along side of the more well known Parmigiana Romano. And please don’t think that means the stuff that comes in an refrigerated canister. That not only tastes like salty sawdust, it contains sawdust, or cellulose, to keep it from clumping. Pecorino is made from sheeps’ milk rather than cows’ milk. That gives it a tangier flavor and a lot less fat.

This dish does contain a lot of carbohydrates. But if you are an active person, this is an easy and fast meal suitable for making after a long day at work.