One day while waiting for the bus to go home from the 200-year-old Soulard Farmers Market in St. Louis, an elderly man was sitting at the other end of the bench with a large bag of potatoes between his knees. He was complaining about how much he had paid for it. He said it was more than what he would have paid in the local supermarket.

My response was “It depends on what you buy. Some things are more, but most things are less and better quality, in my opinion.” I guess some people just don’t know how to shop.

I have always maintained that the first thing to do when you get to a farmers market is to walk around and look at what’s for sale, how much it costs and what the quality is. Is it from local grower or a reseller? Then, once you’ve looked around, you make your buying decisions. Sadly, a lot of people seem to pay little attention to prices and no longer know how to judge quality. 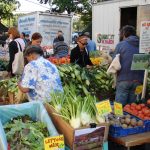 There are many factors that affect the price you pay at a farmers market. One is the type of market it is. Full-time markets tend to offer more deals because they attract more visitors. Summer only markets can have specialty products and producers offering items at exorbitant prices. There’s one such market near me that is fairly popular. I went to it looking forward to some great foods. It was smaller, but closer than the full-time market. But I nearly had a heart attack when I saw the prices. Yes, they had some items not often seen, like goat meat. They had heirloom tomatoes, purple potatoes and piles of fresh herbs. As interesting as they were, I just couldn’t see paying three or four times the price for them. Hey, I’m on a budget, here.

Another factor in the price of food at the farmers market is the type of vendor. While some heirloom tomato varieties are worth paying a little more, and the quality is usually better than the tasteless things in the grocery store, later in the season homegrown tomatoes will offer lots of flavor no matter what the variety. Some vendors are resellers who are liquidating older produce. Be careful with those. Be suspicious of any items wrapped in plastic with a “take it or leave it” cut-throat price. There are also some vendors who have been in the business for generations who can offer great deals because their overhead is paid for. But small producers may not have that option and may not offer any better quality.

Another factor is conventional produce versus organic. One study has shown that farmers markets are competitive on prices of conventionally grown fruits and vegetables. In this case, especially if you don’t shop around, prices at the farmers markets could be higher than what you would pay at the supermarket. But when it comes to organic produce, the vendors at the farmers markets have the best price every time. That’s because it is often the actual small grower who is doing the selling, where as supermarkets have to go through brokers and compete with other stores and chains for a limited amount of goods.

However, I think the eggs from the farmers market are fresher and better tasting than the ones at the supermarket whose origin and age are unknown. In an omelette would you really notice the difference?