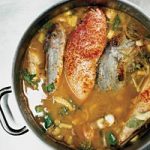 , the famous French seafood stew. It is considered by French chefs to be one of the great challenges in the kitchen. But perhaps you also know that it wasn’t always that way. Like most of the best dishes from around the world, bouillabaisse was originally a peasant dish.

The dish we know today clearly originated in Marseille, France and the name comes from two words meaning boil and simmer. But the origins of the stew go back much further, to ancient Greeks who founded that French port city. They ate a simple fish stew called kakvia. Naturally, the Romans had a similar dish.

Bouillabaisse in its modern form comes from Marseille fishermen who used the common rockfish and shellfish that got caught in their nets, while the more expensive fish were sold. That mostly worthless part of their catch was cooked in a large pot or cauldron filled with sea water, garlic and fennel. This was cooked dockside over an open wood fire. After tomatoes arrived from American, they were added to the recipe.

As the Provencal region prospered, bouillabaisse began showing up on restaurant and hotel menus. Fish stock replaced the sea water. Saffron and local vegetables were added. The name means boil then simmer, and that’s the cooking method. The broth is boiled and then the heat is lowered to a simmer.

There are many recipes available. Each great chef seems to have developed their own version of this dish. But here’s a simple one from Austin, Texas’ Trace restaurant.