Coffee has become one the major commodities exported, traded and imported all around the world. Lots of people will try to steer you away from your morning pick-me-up, but there has yet to be a definitive study proving either coffee’s harm or its benefits. 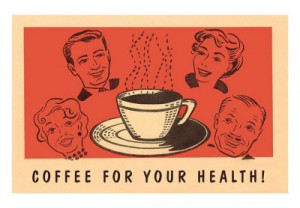 The active ingredient in coffee that causes the controversy is caffeine, a chemical stimulant found in seeds, leaves and fruit of many plants. Caffeine is an xanthine alkaloid and a psychoactive stimulant. Plants make it to use as a natural pesticide. It is the most common and most widely consumed psychoactive substance used by humans.

Whether coffee is healthy or not is a medical argument that goes back and forth. One thing that has become clear in discussing the health benefits of caffeine is how coffee is prepared and in what quantity it is consumed determines how bad it can be. Many doctors say that as a central nervous system stimulant we simply don’t need it. But it has been found very useful in allowing certain pain medications to be more effective. Personally, I think a couple cups in the morning won’t do much if any harm. But if you put away pots of the stuff there could be a problem of over-stimulation which would affect mood, concentration and sleep.

Coffee begins as seeds of a bush. 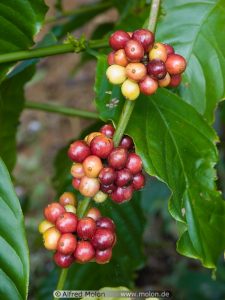 The ripe seed pods are picked by hand, which is part of the cost we see in prices at the grocery store. Next, the green berries are processed in one of two ways: wet or dry. Dry is obviously easier. The berries are laid out in the sun to dry before the flesh is removed to reveal the coffee bean. In the wet method, the berries are allowed to ferment before the seeds are removed and prepared for the next step in the process.

As a side note, the most expensive coffee in the world comes from the North forests of South America where a cat-like animal eats the berries, releasing fermented beans from the other end. I’m pretty sure you can understand why this “cat poo” coffee costs so much.

The beans are then washed, sorted, graded and dried. Drying is done on screen-bottomed tables allowing air to circulate all around the beans which are spread out in a thin layer. They are then bagged and shipped around the world.

The next step in the process is roasting. This can make or break a coffee, no matter what processing or brewing methods are used.