You’ve probably heard that we need to eat fish every week. Fish contain valuable nutrients, like omega-3 fatty acids, important for heart health. It might interest you to know that most shellfish, like clams, mussels, shrimp and oysters, also contain most of these same nutrients. 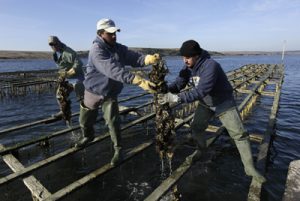 Not only are these good for you with lots of omega-3’s and iron, but they’re good for the environment as well. These shellfish feed off of natural nutrients and algae in the water. That improves water quality. They also can act as natural reefs, attracting and providing food for other fish.

There is one caution about eating shellfish. Be very careful with, and even avoid, raw shellfish that come from warm waters. These often contain bacteria that can cause serious illness.

What shellfish should you get to know? Besides the aforementioned oysters and mussels (the later being very easy to cook and very tasty with rice or pasta), you should try Pink Shrimp

and Spot Prawns. Most shrimp and related species are plentiful and reproduce quickly. But whether farmed or harvested from the wild these are great for many dishes. The pink shrimp are wild-caught from the waters off the coast of Oregon. Spot Prawns, a large shrimp, are plentiful in the wild off British Columbia. The best choices are these and other wild-caught shellfish from the Pacific Northwest. Look for the MSC certification for environmentally safe harvesting.

There is an issue with many of the shrimp you might find available at the store. Many environmentalists are concerned about the by-catch, those sea creatures caught up in the nets when harvesting shrimp. A common fishing method is to use drag nets which not only catch lots of unwanted but environmentally necessary species, but they destroy coral reefs and scrap clean the ocean floor. Although the U. S. has strict regulations on farming and trawling, many other countries do not. So, you should avoid imported shrimp, no matter whether they are wild or farmed. This is particularly true for countries with warmer climates, like Mexico and Central America.

Get your fish fix at least once a week by getting to know some of the other animals from the sea. But be aware of where they come from and how they were caught. That way both you and the Earth can maintain our health.