For many of us, our first exposure to coffee besides the always-on percolator in the family kitchen

More and more coffee is grown in open fields using chemical fertilizers to produce higher yields and greater mechanization. This presents an environmental danger worse than the super strong coffee that came out of that perculator.

Shade grown coffee not only produces better quality with fewer beans, but it also provides homes for many birds and other small animals. The loss of this traditional growing method is costing our world a good deal more than just the price versus high volume, cheaper coffee. There’s also the high use of water for processing the coffee crop. This is particularly important for coffee growing regions in Africa. Some promoters are pushing for ways to make better use of the coffee, such as using the wet grounds as mulch for plants in your garden or home. This supposedly helps keep away bugs.

Brewing can be done in many ways, from old-fashioned boiling to the common drip method to the French Press. These come in four basic categories: boiling, filtration, steeping and pressuring.

Pressurized brewing is commonly called Espresso, although there are some alternate ways of using water or steam under pressure to produce a concentrated coffee. A Moka pot

, or Italian coffee pot is a three chamber stovetop device in which water is boiled in the lower part. The steam and water thus created is forced through a small opening into the middle section where the coffee grounds are. Between the middle and top sections is a filter. As the pressure builds, the coffee is sent through the filter into the top section where it is collected for serving. The strength is similar to espresso, but without the crema. 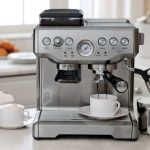 we’ve talked about already, but to cover again, finely ground coffee is packed into a thick disk called a puck. High pressure steam is then sent through the puck pulling out many of the hard-to-dissolve compounds and oil that regular brewing won’t remove. The toffee-colored foam that comes out is called the crema and is the mark of properly espressed coffee. Underneath the rich crema is a strongly flavored coffee that is thicker than regular coffee. It also has a taste not produced by any other method.

In recent years, single-serve coffee methods have come on the market which also use steam or high pressure water to quickly extract coffee from the grounds. These usually use pre-packed coffee pods for single-use brewing.

Boiling involves simply cooking the ground coffee in water, just like my father did on those camping trips. It’s simple and easy but does not provide the kind of control needed for a good cup of coffee. Egg shells and other additives have been used to help settle the grounds. This is called Cowboy coffee. The ground settle and then the coffee liquid is poured off the top. But some cultures use a simple strainer, much as traditional tea brewers use. This is most common with the very strong coffees of Southern Europe, Northern Africa and Asia Minor, especially Turkey. Very finely ground coffee, water and sometimes sugar are put in a narrow pot and boiled. Another traditional methods involves a single cup, common in Southeast Asia and Indonesia. There, this method is known as Mud coffee. Boiling water is added to a coup containing ground coffee. It is then allowed to cool, during which time the ground settle to the bottom of the cup. Only very finely ground coffee works in this method. Most boiled coffees are extremely strong and rarely subtle.

Filtration methods use a combination of boiling and gravity to brew coffee. First came the percolator 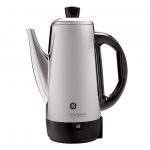 . This device, whether electric or stove top, boiled the water, sending it up a tube to erupt over grounds in a basket, usually containing a paper filter. That moved into the drip coffee maker. Like the percolator, water was boiled and sent cascading over grounds. But unlike the percolator, the water was only cycled through the grounds once. Percolators keep boiling and circulating the coffee water through the grounds until a selected strength is achieved. Drip systems use a controlled release of the water from the basket containing the ground coffee. Ideally, this has to allow appropriate amount of time for the hot water to extract the coffee compounds before moving into the pot, or carafe, underneath the basket. Drip coffee can be automatic using an electric coffee maker, or manual, in which boiling water is pouted into a container at the top of the maker.

Another variation is called the Neapolitan Flip Pot. Like the Moka Pot, it is made of three sections. The lower section contains water to be boiled. The top is basically an upside-down version of the lower section. In between is a filter containing the coffee grounds. Once the water in the lower section comes to a boil, the pot is turned upside down to allow the water to slowly pass through the grounds in the filter section. This device can then be take apart with the now-lower section used as an ordinary serving pot.

We’re not done yet. There are other brewing methods to talk about, as well as one of the most popular — steeping. So, stick around for more Coffee Talk!