When you began learning about food, a whole new world opens up. It isn’t about being a foodie or a gourmet, but about what food meant to all different kinds of people. Beyond just food, there was also an education in drinks: fine wine, coffee, tea, hot chocolate, even milk.

We’ve looked at where coffee comes from, how different roasts affect the taste and the caffeine content, different grinds and grinders. Now, we’re looking at brewing. There’s boiling, gravity filtration and pressurized. And then there’s another classic brewing method.

Steeping is exactly what it sounds like. Boiling water is poured over grounds and allowed to sit for several minutes, allowing the hot water to extract the flavor from the grounds. The French Press 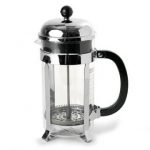 is one of the most common methods using steeping. The French Press got its name because of the plunger. When the coffee has been steeping long enough, anywhere from four to seven minutes, the plunger presses the grounds to the bottom of the pot. The filter part of the plunger also holds the grounds down while the coffee is poured. This method usually requires a courser grind.

Another steeping method developed in recent years takes a page from tea brewing. Most of us are familiar with the tea bag. But there are also coffee bags 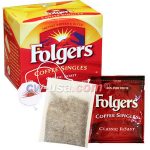 on the market. The coffee is brewed in the cup just as you would with a tea bag. In Malaysia a muslin bag called a sock is used to steep a large pot of coffee. This is sort of a homemade coffee bag.

When we talked about other brewing methods, one used what’s called a flip pot. Water is boiled in a lower section while coffee grounds are in a filter in the middle and an empty pot on top. When the water boils the whole thing is turned upside down and the hot water allowed to trickle down through the grounds to the other pot. A similar method is used in one steeping method, called the vacuum pot

. Water is boiled in the lower pot where building pressure pushes it up into a top chamber containing ground coffee. The coffee then steeps. When all the water has been pushed up into the top, the pot is removed from the heat and allowed the cool. The resulting vacuum pulls the coffee through a filter into the bottom pot from which it is then served.

There are two other steeping methods that have been developed in the last decade or two. One is called an Aeropress which combines the steeping of a French Press with the pressure of an espresso maker. Instead of using a plunger to press the grounds into the bottom of the pot, the plunger is used to push the steeped coffee through a filter into a cup.

Brand new on the market is something called a Softbrew, which is like a French Press without the plunger. Not a lot of information is available on the quality of this method.

So, now you know all the different ways to make the perfect cup of coffee and all the factors that affect the quality and the taste. But there are many myths about coffee making. We’ll look at those next.