We were thinking the other day in The Bachelor’s Kitchen about how easy it really is to come up with a delicious, satisfying and even healthy meal in no time with things you have on hand. 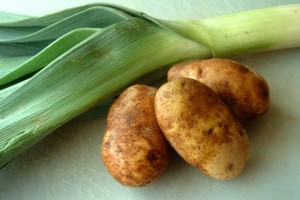 At the farmers market, we had purchased some leeks, an ingredient we love to use in The Bachelor’s Kitchen. There were some potatoes we purchased for something else that never got made. Suddenly, the idea of our favorite potato leek soup came to mind. And we were off.

We could have tried to find our recipe, but instead we decided to wing it. Taking our soup pot down from the shelf, we light a low fire under it and began peeling and chopping potatoes and leeks.

We add some olive oil to the pot and add the leeks, slowly sweating them with a pinch of salt. As they soften, we add a couple tablespoons of flour and get all the leek rings coated and turning a little brown. Chicken broth is added and the chopped potatoes. We topped off the pot with some water to make it more soup-like. Once the potatoes were soft, we added two cups of milk, lots of ground pepper and some dried herbs. Another hour of slow simmering and it was ready.

It was that easy. So you have no excuses.