Rice is a good starch for everyone. It’s the most digestible, least allergenic food you can eat. It contains the starch of wheat or potatoes without the negatives. In fact, you can almost eat all the brown rice you want without adverse affects on your waistline or anything else.

But rice can be a little tricky to learn to cook. Instant rice is a good alternative for those who haven’t learned the trick. It has all the same nutritional value and is easier to cook. But I also think everyone should learn the proper way to cook rice. It’s not that hard, it just takes a little practice. 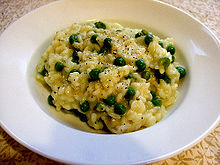 Another way to do it is to make risotto. This popular Italian rice dish often scares off the less experienced cooks because they’ve been told it’s time consuming and difficult. But it doesn’t have to be and it takes less time than you might think.

The key to risotto is the rice itself. Most of the rice we eat in this country is long grain white rice. Long grain brown rice is increasing in popularity because of its health claims. Less commonly seen is medium grain rice, used often in latin american cooking. Then, there’s short grain rice. There are several varieties, but the best known in this country is Arborio rice, a short grain grown mainly in Italy and other Mediterranean countries. Arborio is the rice usually used for risotto here, while in Italy Carnaroli, a medium grain rice, is used most.

Why? Because short and medium grain rice contains more of the type of starch that can be leached out of the grains with hot liquid, making a creamy dish that goes well with cheese and other ingredients. It makes a good change of pace and is a lot easier to cook than you think.

Here’s what you need:

You can also add in cooked meats, herbs, spices and cooked vegetables to make variations on basic risotto.

Here’s what you do:

That’s it. You don’t have to stir constantly, as some cooks say. But you do have to stir a lot to help get the starch out of the rice and into the liquid. This also prevents it from becoming clumpy.

Arborio or other specialty rices are expensive. But they last a long time and are worth the investment.