Lots of cultures have food traditions for the new year, no matter when that day is. In the western world, that day is coming in just a few days. So, if you’re looking for a little extra luck this year, here are some ideas.

There are many cultures which cite eating these kinds of foods on New Year’s Day. Historians say this is because the legumes resemble coins, a symbol of prosperity. One of the best known dishes to fit this bill is 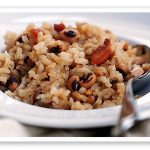 Hoppin’ John, a dish of black-eyed peas (which are really beans) and salt pork. This was made popular in the American South by slaves, former slaves, share-croppers and other poor people. In several European cultures lentils and sausage are the post-midnight treat for good luck. 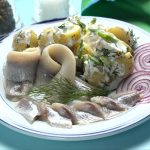 herring. Pickled, creamed, whatever form of this little Northern waters oily fish is to be consumed as the New Year begins. Several countries claim this as a lucky dish. In Denmark it’s boiled cod. In Japan, there are three seafoods eaten for more than just luck. They consume herring roe (fish eggs) for fertility, shrimp for long life and dried sardines for a good harvest. 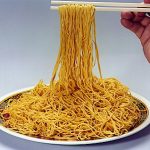 This is mostly an Asian tradition, where food symbolism is an important part of daily life as well as celebrations. Long noodles symbolize a long life.

Grapes are the lucky food os Spain, where it is traditional to eat 12 grapes 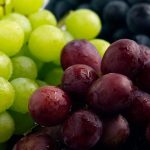 at midnight, one for each of the coming months. The taste of the grapes, sweet or sour, is supposed to indicate what that month will be like for the eater.

Round, Ring or Circle Shaped Foods 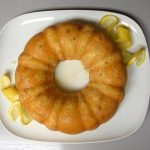 This tradition goes back to Pagen Europe days and says less about the new year’s luck and more about the celebration of the completed year – having come full circle. Ring-shaped cakes, including doughnuts, are very popular in several cultures. And many round cakes served for the New Year’s Day feast contain a coin, awarding luck to whomever gets that piece.

Just as there are lucky foods for the new year, so there are foods you should avoid.

In many cultures, white is the color of death, so one should avoid eating any white foods like eggs, cheese or tofu. Because lobsters 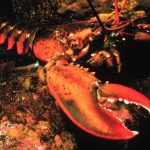 walk backwards, some people say you shouldn’t eat this crustacean on this occasion because it would cause a set-back in your luck. Chicken is another food to avoid because you don’t want your luck to fly away.

Another New Year’s tradition in some cultures is that you should never clean your plate. Leaving some food on the plate is supposed to ensure a plentiful year and a full pantry.

Whatever your food tradition might be for the New Year, remember that we all want a better year, we should all be kinder and more generous to others, and we should try to be happy. Just don’t over-do the alcohol. Nothing ruins a new start like being a loud, sloppy, stupid drunk. That’s not the way to start the new year.