Grilling season is here. As we consider putting food on the barbecue, we also think about using marinades to improve the flavor of meats. With the quicker cooking times on the grill, this is a good way to get even more out of your expensive steaks, ribs and even chicken and fish. 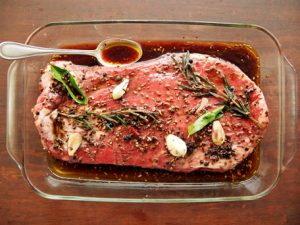 If you buy a prepared marinade from the grocery store, you deserve to lose your money. You can make your own marinade in just a few minutes. Also, you can make it to suit your own tastes and needs.

We were inspired to discuss this issue looking over the rundown for Lynn Rossetto Kasper’sThe Splendid Table radio show from American Public Media. I don’t know if you’ve heard this program, but if not, you should. The hour-long program is also available as a podcast from  APM.

The first thing she points out is that marinade recipes, like most recipes, should be used as just a guideline. After a little practice, you won’t need a recipe. You can make a marinade with ingredients already in your kitchen. And, you can do it for just pennies compared to those fancy store-bought marinades. 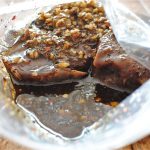 Essentially, a marinade uses acid to convey flavors into meat, fish or poultry. It also helps tenderize tough meat by breaking down some of the fiberous connective tissue in the muscle. Some marinades use little or no acid, especially those for more delicate proteins, like fish. Most of us know that chicken and turkey these days often has little flavor. Marinades can help that a great deal. Same for farm-raised fish. The marinade, combined with a cooking method, can make a hug difference in the taste of your dish.

Lynn has this recipe for a basic Italian Balsamic Marinade:

Combine garlic, balsamic, olive oil, black pepper, and dry or fresh basil. A nice trick is that you can make inexpensive balsamic taste more like the pricey stuff by boiling it for 10 minutes with a little sugar… figure 1 to 2 tablespoons sugar per cup of inexpensive balsamic.

You can add more to this with the addition of things like anchovy paste, soy sauce, oregano, rosemary, cumin or other spices and herbs. This can be used for lots of meat and poultry. But Lynn says not to use this method for vegetables.

Don’t marinate vegetables as some will throw off water and become soggy before they ever touch the grill.

That advice applies to other cooking methods besides grilling. I find the best way to add those flavors to your vegetables is to apply the same ingredients during the cooking process, like a seasoning.

Interested in something with a more Asian flavor? Lynn has an idea for that, too.

Puree together equal parts of fresh ginger and garlic with soy sauce. Add sugar and pepper to taste.

As before, you can add things like toasted sesame oil or rice vinegar to increase the dimensions of the flavor.

Puree together a scotch bonnet or habanero chile (use gloves to handle these searingly hot beauties) and blend with 1/4 cup each of oil and vinegar, half an onion and generous teaspoons each of thyme, allspice, black pepper and cinnamon.

Note the careful handling of those peppers. A little goes a very long, long way. Scotch bonnets are the hottest peppers on the market, so don’t treat it like some plain ol’ jalapeño. The use of gloves is advised because the capsicum oil can get into your eyes or on your skin and create great discomfort, the kind that sends you to an emergency room.

You should also note the use of aromatic spices like cinnamon and allspice. This is common in African and Middle Eastern cooking. Try it. You’d be surprised what spices can do. There’s a reason why the spice trade built empires and fortunes for centuries.

If you’re using a marinade on meat for the grill, Lynn has some more advice.

Marinades and sauces containing sweeteners like sugar, honey, or molasses will burn quicker than those without sweeteners. Watch them closely, and move to indirect heat if they start to burn.

Here’s another tip: don’t leave the protein in the marinade for too little or too much time. Too little and the food won’t pick up much of the flavor you went to all that trouble to build. Too much and it can ruin the texture of the meat and turn it gray. A lot depends on the type of meat and the ingredients of the marinade. The more acid, the less time. The more delicate the meat, the less time. The tougher or more flavorless the meat, the more time.

As a general rule of thumb, fish and seafood should be marinated for only a few minutes, usually in the amount of time it takes to heat up the pan or pull other ingredients together. Ceviche, a sauce made with acid like lime juice, is a common way to prepare delicate fish or seafood in Latin America which involves no heat, just the cooking power of the acid.

Chicken needs at least a half-hour to pick up flavors of a marinade, but can stay in the liquid for up to three hours, again as a rule of thumb. Over-marinating can make the meat, especially breast meat, meally. Turkey is often brined (submerged in a salty solution) overnight. This is actually a form of marinating. In fact, the word marinade comes from the latin for brine, aqua marina (sea water).

For beef, pork or lamb, marinating is often best if allowed to take place several hours, like overnight. This both tenderizes and adds flavor to the meat.

Feel free to experiment in this technique. You can add a lot of flavor with just a few ingredients and a little planning.