Whole grains are not only more popular, they are great nutrition that helps you lose weight and stay healthy. We are all aware of oatmeal as a whole grain dish. But there is a grain you might not have considered: Bulgar. 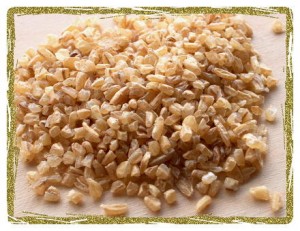 Bulgar is a cereal food made from wheat groats, or berries. Groats are hulled grain kernels. Bulgar originated in Turkey and is found around the Middle East, India and Europe. In the grocery store, it comes parboiled (partially cooked) and can be found in the cereal or baking supplies aisle.

Bulgur can be used in pilafs, soups, bakery goods, or as stuffing. In breads, it adds a whole grain component. Its high nutritional value makes it a good substitute for rice or couscous. In Indian cuisine, bulgur or daily

, is used as a cereal with milk and sugar. In the United States is often used as a side dish, much like pasta or rice. In meals, bulgur is often mistaken for rice because it can be prepared in a similar manner, although it has a texture more like couscous than rice.

Variety in your diet is good. So, try something new and pick up some bulgar at the store.