Salmon is one of America’s favorite fish. It’s easy to cook and it has a meaty flavor that appeals to our meat-heavy tastes.

Sadly, the popularity of salmon means it is being overfished in the wild. Many environmentalists believe some species of salmon could even go extinct. Some foodies complain that farm-raised salmon just doesn’t have the taste that wild salmon has. I tend to agree with that. 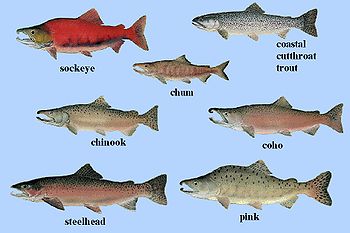 There are several popular species of salmon, each with different characteristics and flavors. They are part of the same family as trout. Most are in the Pacific Ocean. One is in the Atlantic, called what else, the Atlantic Salmon. Some of these are also found in some lakes in Northern Europe and North America. Most Atlantic salmon is farm raised and makes up most generic salmon fillets you find in the store.

Of the Pacific species, four are probably best known here in the U.S.: Coho, Pink (also called humpies), Red or Sockeye, and Chinook. Chinook, also called King Salmon, are the largest and prized for their large, lean fillets. Pink and Red varieties are often used for canning. Another canned species is the Chum salmon, which ranges as far South as the Central California Coast.

One problem with farm-raised salmon, or other fish, is that they are usually fed something other than what they would naturally eat, like corn. Salmon eat other fish, but supplying wild fish for farm salmon is very expensive. Thus, the taste of farm salmon is more mild, almost bland. It also has less of the rich Omega-3 oil that makes salmon so popular for heart health.

Because many people think salmon is less flavorful than it used to be, the key is to cook it in a flavorful way. That’s what makes this Skillet-seared Salmon dish so attractive.

All you need is a nice fillet of salmon, a couple of Roma tomatoes, a pepper of your choice, some olive oil, a little salt and pepper and if you like it, some cilantro.

Wash and dry your salmon fillet. It should be about an inch thick at its biggest point. Like all good fish, it should be nice and pink, moist and not fishy smelling. You can leave the skin on if you like, or take it off when it’s cooked. Also, feel your fish. It’s the best way to tell if there are any little bones in it. When doing anything in a skillet with oil, always try to get your food as dry as you can.

Halve and remove the seeds from your tomatoes. Then chop into large chunks. Do the same with your pepper. You can use a regular green or red pepper, but for a little bite, use a jalapeno. Just be sure to clean out all the seeds and ribs. If using cilantro, wash and dry it thoroughly.

Now heat your skillet on medium high, then add a tablespoon of oil. When it’s hot, carefully lay in the fish. Just let it sit there for about 4 minutes then carefully turn it over. Be gentle. Fish cooks quickly. It should take about 8 minutes total. It’s done when a fork can easily pull it apart and it flakes into small clumps.

Remove the fish from the pan and set aside on a plate. Cover it loosely with foil.

Add the tomatoes and pepper to the pan and saute for a minute or two then add that to the fish. Garnish with cilantro, if you use it, and enjoy. For something a little heartier, add a couple spoonfuls of rice on the side.

One of the wonderful things about cooking salmon is that it can take a little overcooking because of its high oil content.