Leftovers accumulate quickly at this time of year. We make those bigger-than-usual dinners and have plastic storage containers full of small amounts of starches, vegetables, meat and gravy. What do you do? What do you do?

Well, the housewife of the past would know what to do. When the refrigerator gets full, make soup! 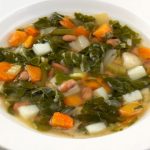 One of the wonderful things about soup is that you can make it from just about anything. Leftovers are particularly good for bringing together a quick meal in the stock pot.

What we had in the house. Since we had chicken instead of turkey, there was really only a little meat left from when I made stock. Because I had planned to make soup, I had picked out the meat from when I made stock from the mostly barren carcass of the bird. I also had plenty of chicken stock, homemade just a few days ago. I had made a pot of Great Northern beans with onion a week before, a little brown rice and some vegetables that had been stir-fried. We also had some nice broccoli crowns.

I found a recipe for a broccoli, cannelloni bean and cheddar soup that I thought could be adapted to my use. So, I started with two cups of homemade chicken stock and the same amount of water. I prepared one large broccoli crown by cutting it into bite size pieces which I washed. I brought the stock and water to a boil and added the broccoli. When the broccoli was tender, I lowered the heat to a simmer and added about a cup of my Great Northern and onion bean mix, a pinch of kosher salt, a few grinds of black pepper and made sure everything was cooked through. Then I added the stir-fried vegetables, about a quarter cup of mushroom gravy, about half a cup of shredded chicken and about a cup of shredded cheddar cheese. I poured about half the soup into a bowl and used an immersion blender to puree the mixture to add texture to the soup. I added the puree back into the pot along with about two tablespoons of balsamic vinegar and it was ready to go. We discovered the dish could be improved by adding a squeeze of lime juice into the bowl just before serving.

Soup is easy and a great way to clean out the refrigerator of all those little partial servings of leftover whatever. It goes great with a salad or a half sandwich.