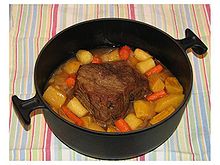 Pot roast is an American classic. But it’s not just American. You can find pot roast in some form in many countries, especially Northern European areas of Britain and Germany. In the U.S. we have Yankee Pot Roast, which adds carrots, onions, potatoes and celery to the braise. But in Germany, you have Sauerbraten which is marinated and usually cooked with cabbage, spatzle, potatoes or noodles in a vinegar-heavy mix. There is also a common Japanese version called nikujaga.

In Yankee pot roast, the cut is usually beef chuck, which comes from the upper front part of the cow, where we would say the shoulder is. But you can also make pot roast from the rump cut or from venison, lamb, mutton or pork.

There are two basic steps to pot roast. First, the meat is browned in a hot pan. This caramelizes the sugars on the surface of the meat, adding a lot of color and flavor to the dish. The second part is called braising, cooking slowly over a low heat in a flavorful liquid. Braising is perfect for tougher, cheaper cuts of meat because the low-and-slow cooking tenderizes it to a “fall off your fork” texture.

So, here is my recipe for an easy Pot Roast Dinner, consisting of chuck roast with root vegetables, gravy made from the cooking liquid and baking mix biscuits. You can vary the ingredients to your personal taste, adding other vegetables, various liquids and spices. Take this recipe and make it your own.

See the Fluffy Biscuits recipe in our recipe section.

Use the gravy to top everything on the plate, including the biscuits.  This is an easy, filling meal.